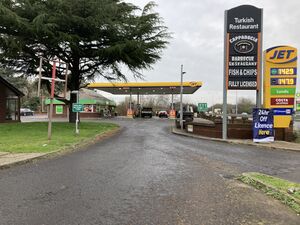 A complicated history of several sites clustered around a junction. While it is technically possible to move between northbound and southbound here, it's not an official route.

None of the northbound facilities are accessible to HGVs.

Only the southbound forecourt is accessible to HGVs.

Short stay customer car parking is available on both sides.

No HGV access is available northbound. The southbound side can be used by HGVs, but there are no formal parking spaces. 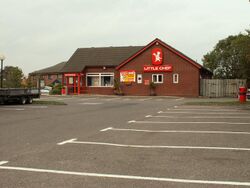 The southbound Little Chef, pictured in 2006.

The bypass of Capel St Mary is an old (1960s) one, with a flat crossroads serving the village. When the village was bypassed, a pair of garages were built on the new bypass.

The southbound filling station known as Bentley Service Station was formerly directly operated by BP as one of their BP Connect sites. In 2009, a Wild Bean Café was added. In 2014, the site was sold to an independent operator who removed the Wild Bean Café and briefly added a Mace store. This was replaced by a SPAR store in 2015, before being de-branded in early 2021. The store is now a Costcutter with no external advertising.

There was once a third restaurant immediately to the south of here at the previously junction. This was built in the early 1980s as a Happy Eater. Initially it competed with Little Chefs, and then pretended to compete while they were both owned by the same company. Eventually it had to be converted, but it only served as a Little Chef from 1998 until 2000 before it inevitably closed. The building went onto become the Harvest Moon Café until 2017 when it was converted into Zaynab Indian restaurant.