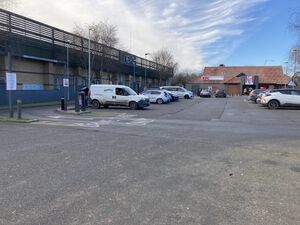 A12 at Martlesham Heath

Martlesham Heath retail park has grown around one of the roundabouts on the A12, but it includes a signed service area. As a result, there is competition from the Tesco Extra across the road.

Development of the Martlesham Heath industrial estate began here in the early 1970s with a small parcel of land adjacent to the A12 being allocated in 1985 for a filling station and restaurant to be built. This proposal was soon picked up by Trusthouse Forte who opened a Happy Eater restaurant here in 1987 with Mobil providing the filling station.

Following the sale of Happy Eater to Granada in 1996, the restaurant became the Martlesham branch of Little Chef and opened with a Burger King franchise. At the same time, the filling station was rebranded to BP.

Between 1988 and 2000, Mobil proposed to add a hotel to the east of the forecourt several times before the plans were eventually dropped. The land later became part of the ever-expanding retail park in 2012 with a Pets at Home store being built.

BP were granted planning permission in 2004 to redevelop the forecourt which would have seen new pumps, a larger sales building and new car wash as well as the site becoming a BP Connect site with a Wild Bean Café however these works never took place. A Wild Bean Café offering was eventually added inside the existing shop in 2019.

The Little Chef soldiered on until 2007 when it and the Burger King franchise both closed. In 2009, the restaurant building was purchased by KFC who refurbished the building and opened a KFC Drive Thru here in late 2009.

Between 1975 and 1989 Little Chef attempted several times to build a restaurant north of here in Woodbridge on Grove Road, both next to the petrol stations or on the roundabout. They were probably motivated by competition here.