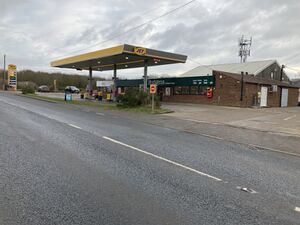 A small petrol station close to Darsham level crossing means this service area can boast good access by both road and rail.

A garage here dates back to the early 1950s and was known as Station Garage, operated by A.E. Kerridge & Sons, which gained a couple of fuel pumps next to the existing car repair garage in 1962. Fuel was initially provided by BP and Shell.

The site later gained a car sales showroom in the early 1970s with a sales kiosk also being installed for the sale of fuel. In 1988, the forecourt was redeveloped with an existing bungalow and toilets being demolished to make way for a new sales car repairs garage, sales building and canopy over the existing pumps. The site also gained Texaco branding at this point.

By 2001, the site was Murco branded. A year later, the car sales showroom was converted into a Lily's Pantry and a Londis store. By 2008, the site had rebranded to JET. The car repairs garage also closed during the early to mid-2010s.

The forecourt shop was rebranded in 2017 to Budgens whilst Lily's Pantry became Lily's Café. The forecourt also gained a PodPoint electric vehicle charging point in 2018.

Since 2006, there have been several plans to develop the land to the north and east of the site. These plans have included a 48-bed hotel and café for the north of the site and a 'eco holiday lodge' village for the east of the site utilising the existing woodland. Planning permission was granted for the eco holiday village in July 2020 with 23 lodges planned. Access to the site would be through the existing forecourt car park.