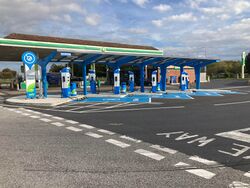 An MFG EV Power charging hub, in front of one of their forecourts.

MFG (Motor Fuel Group) is currently the biggest forecourt operator in the UK. While you may not know the name, as they tend to let their fuel and retail brands do the talking, they own many of the forecourts along both major roads and in urban areas.

They are now focusing on food sales, by creating new 'food to go' environments and investing in stand-alone coffee shops and fast food units. New partner trials include M&S, B&M and Pret A Manger, as well as Greggs and Burger King, and they are looking at options with their sister company, Morrisons.

They are developing new 'charging hubs', both attached to existing service areas and standing on their own, all under the 'MFG EV Power' name. MFG hopes to double the number of EV Power sites in 2022, and is considering franchising to bring it to more partners.

MFG was formed on the basis that a new subsidiary company would be formed every time the founders acquired a new series of sites, making the business easier to manage. Under its own independent banner, MFG grew to over 900 sites, and they are currently working on bringing all the companies under one banner.

They formerly used Costcutter as a shop brand, but entered a deal with Booker in 2016, bringing Budgens and Londis into their network. Most Costcutter stores were re-branded by the end of 2016.

However, forecourts that had come under MFG's control after their acquisition of MFG had either SPAR stores or Hursts, which was MRH's own store brand. With priority on the rebranding of their SPAR stores, the vast majority of these stores have now been refurbished and rebranded as Londis.

While MFG have been redesigning their shopping areas to focus more on 'food to go', they are also looking at new shopping brands, such as M&S and B&M.

In 2015, MFG acquired some forecourts from Shell including sites on A-roads; the retail parts of which were refurbished to include the standard MFG offering of Costcutter, later Londis.

MFG's owners sought to acquire the supermarket chain Morrisons in 2021. The Competition and Markets Authority blocked the sale until MFG agreed to sell 87 sites, most of which would go to SGN. The Morrisons partnership could potentially allow for new crossover opportunities.