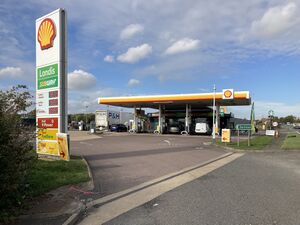 A1 northbound between Peterborough and Stamford

A newly-rebuilt petrol station on the A1.

Parking within the Starbucks car park is limited to 2 hours maximum stay. These restrictions are strictly enforced by Civil Enforcement Ltd. 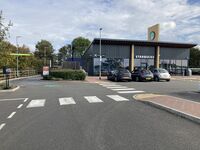 The Starbucks Drive Thru, built in replacement of the cafe.

A pair of filling station were positioned here long before the A1 was upgraded to dual carriageway.

The northbound site became known as Super service station and it had a large parking area, gaining a café called 'Woodview Café'. The filling station here has always been branded Shell since opening.

The northbound café closed in the early 2010s. In August 2018 the café was demolished and a Starbucks Drive Thru was built on the land.

Shell sold the site to MFG in 2017, who rebranded the shop to Londis. During early 2018, MFG refurbished the site with a Budgens store replacing Londis, Starbucks on the Go replacing Costa Express and a new Subway store being added. The store was later reverted back to Londis during Autumn 2021. 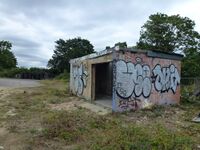 Another petrol station called Abbotts Wood service station was situated on the southbound side, but this closed in around 2005 and was eventually demolished. Its position - and a dilapidated building - can still be made out. Shell had proposed to add a 40-seater restaurant to the site in 1992, but this was refused on the basis that there were other facilities nearby and the need for a similar facility here was unnecessary.

There have been several plans to bring the southbound site back into use, with the first coming in 2006 for a 20-bed hotel to replace the derelict buildings but these plans were refused again due to being too close to nearby facilities. In 2010 and 2017 there were plans to bring the site back into use as a petrol station to no success. However, planning permission was granted in January 2020 for redeveloping the former Abbotts Wood site and build a 20-bay electric vehicle charging station, with an amenity building providing refreshments and toilet facilities.