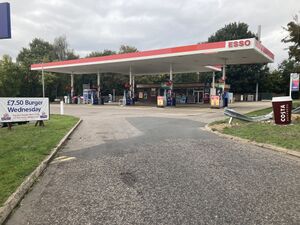 A branch of OK Diner by the side of the A1. It is technically possible to access it on the southbound side, but it's a significant detour. 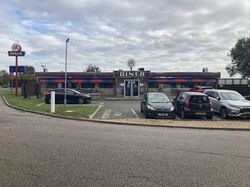 A pair of petrol stations were built here when the bypass of Great Casterton opened in the 1960s. The southbound side was abandoned and later demolished.

The northbound filling station was abandoned at some point during the early 1980s, and in 1989 Pace redeveloped the filling station opening a Texaco forecourt. Throughout the 2000s the site included Texaco's own-branded Star Market and offered a Coffee Nation machine.

Plans for a restaurant to join the filling station date back to 1989 when Trusthouse Forte were granted planning permission to add a restaurant here. This didn't happen and instead in 1996 OK Diner built their Tickencote branch here.

MFG had intended to add two EV charging hubs here on either side of the forecourt, but these plans were later withdrawn as the petrol station is one of 87 petrol stations that they intend to sell in 2022 under a deal with the Competition and Markets Authority.

The garage was also signposted as the exit for a campsite.