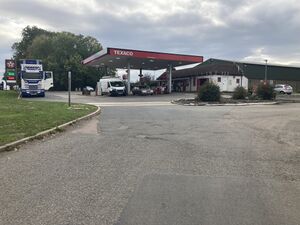 The old inn has been demolished but its neat name lives on. It is technically possible to access it when travelling southbound, but it's a long detour. 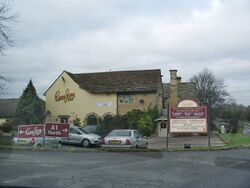 Ram Jam Inn when it was open.

There was a pub here called the Winchelsea Arms, built in the 18th century. Shortly afterwards, it changed to its much more remembered name: The Ram Jam Inn.

Theories as to what the name means are varied, but generally involve a confidence trick where the landlord had her thumb jammed in a barrel. The pub was frequented by Dick Turpin who is the suspected culprit of any such tricks. It's not named after the '70s rock band known for the single Black Betty, but it has leant its name to a different Ram Jam Band featuring Geno Washington.

A garage was later built next to the pub in the early 1900s and became known as the Ram Jam Garage. This eventually gained fuel facilities, turning the site into a full service area. Access was available from the service station or from the B668.

The fuel facilities were upgraded to a forecourt with canopy and shop facilities in 1988, with Texaco providing the fuel. The site later rebranded to Esso at some point during the 2000s before rebranding back to Texaco with a SPAR store in the early 2010s. The garage facilities were upgraded in 2011, with Greetham Garage acquiring the workshop in 2015, relocating from their original garage in Greetham village.

The Ram Jam Inn continued as a pub-restaurant, an inn and a conference centre until August 2013, when it was closed and put up for sale.

Godwin Developments received planning permission to demolish the Ram Jam Inn and replace it with two drive thru units and two standard units in January 2021. These would be arranged around a car park, with Greetham Road becoming the main access point. Although not named, the units are likely to be the same as the other franchises seen along the A1.

The developer has argued that the Ram Jam Inn is in a poor state of repair and cannot be adapted into the plan, although it not being the shape and style most fast-food vendors would want is also a factor.

The four units were put up for let in September 2022, with demolition of the building beginning soon after.

Meanwhile, MPK Garages have requested permission to demolish the existing forecourt shop and reposition the shop from the west of the site (adjacent to Greetham Garage) to the south of the site adjacent with the A1. The proposal means that the forecourt shop would be exceptionally larger and could offer more produce. Prior to this redevelopment, the shop was re-branded from SPAR to Londis in 2021.

Greetham Garage permanently closed in September 2021 with the owner Julian Carlew retiring after 45 years. The workshop has since been sold to a national recovery firm.