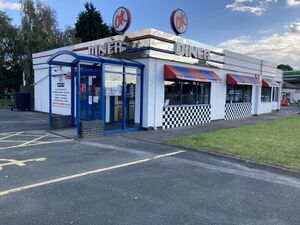 Roadside diners have been a feature of Britain's main roads since the 1950s, although the idea itself was inspired by what's offered in America.

OK Diner is now one of the UK's largest chain of diners, and it remains loyal to its American roots with a menu of burgers, milkshakes, breakfasts and bagels. Most branches use chrome-effect fixtures to create a retro American theme.

OK Diner rose to prominence in the late 1990s, an era where the roadside was dominated by Little Chef. By keeping their estate more manageable, OK Diner has managed to avoid the downfall that its bigger rival experienced, yet OK Diner has enough branches to keep it recognisable for regular road users, putting it in a better position than smaller chains.

Although a few of OK Diner's branches are positioned at a designated service area, they generally maintain that they are not the service area itself, and that people who are just looking for toilets should head to the petrol station itself.

Since the 1990s, it has been common for A-road service areas to be built by development agencies, who zone land for different purposes, and OK Diner would then express an interest in the restaurant section. Naturally not all of those proposals worked out, but they also make an appearance in many places that aren't official service areas.

The following signposted service areas have an OK Diner: