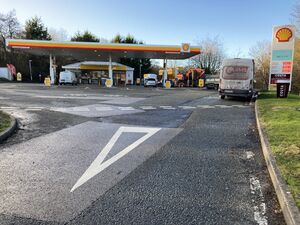 Better known as Northop Hall services, this site offers array of different facilities spread out over a hill.

Short stay customer parking is available for cars at all facilities on both sides and each parking area is subject to their own restrictions.

Short stay HGV parking is only available on the north-westbound side in a lay-by on the exit slip.

The main amenity building on the westbound side, now only home to a Costa unit.

When driving westbound, the road signs are very clear that the site is called Gateway services, referring to its position just beyond the Welsh border. The eastbound side doesn't have a name but its facilities refer to themselves as Northop Hall.

On the westbound side there are a number of facilities spread out across the hill, but the Costa building claims to be the main public facility (the one meeting the contractual obligation to provide free toilets).

Shell installed 4 Shell Recharge electric vehicle charging points on the eastbound side in 2021. These aren't expected to be switched on until late 2022.

Both sides of the services opened in the late 1980s. It was originally planned as a pair of Little Chefs, but what opened was completely different.

The westbound side had a forecourt and a hotel, with space in the middle left for more restaurants. The hotel and land around it was owned by Autolodge Hotels Ltd, Meanwhile the eastbound side opened with a Happy Eater, a Travelodge and a forecourt.

In 1996 Forte changed the Happy Eater to the more profitable Little ChefHistory brand, and this branch received additional attention with a thorough refurbishment providing with air conditioning, new furniture and a blue colour scheme, in order to attract more evening diners.

Under Granada, a Burger King was opened, but the 'blue' changes were later undone and the Burger King itself closed. This became a Coffee Tempo! and later Little Chef Express. When Little Chef and Travelodge became separate companies, Travelodge kept the land here The restaurant was closed by Euro Garages in April 2017 and re-opened two months later as a Starbucks. A Greggs store then joined the Starbucks in late 2018.

The westbound Subway and Costa opened in 2008, with space in the middle for a Visit Wales tourist information centre that was never used. This building was built by Mold Developments Ltd, who took over from Autolodge. The Subway unit closed in 2018 and the unit is currently vacant.

The eastbound forecourt was a Total site, with Total calling it 'Expressway Service Station'. It became Shell in 2012, and was re-built in 2016.