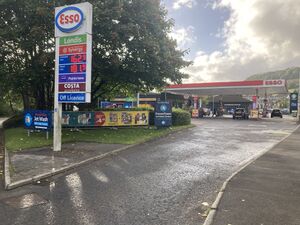 A82 westbound between Glasgow and Dumbarton

This service station is in Scotland, not to be confused with Milton Heights in Oxfordshire.

A number of restaurants as the A82 enters Dumbarton. The site is known locally as Milton services, but signs on site call it Dumbarton Gateway services, while it has been nicknamed both Gate and Dunglass. 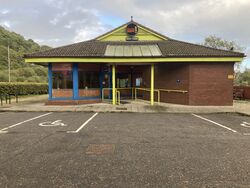 The site started out as a nursery before it became a pair of garages in the 1960s.

The service area we see here today was developed in the early 1980s as a joint venture between Esso, Trusthouse Forte and Strathford Motor Company. The site opened with an Esso forecourt, known as Dunglass, alongside a Tourist Information Centre and the Dumbarton branch of Little ChefHistory in around 1983, replacing the bypassed Clydebank branch.

The site later received a £1million redevelopment during late 1987 and early 1988 with Esso redeveloping their forecourt, Strathford Motor Company demolishing their existing garage and replacing it with newer, modern facilities and Trusthouse Forte adding a 32-bed Little Chef Lodge. The hotel later became a Travelodge.

The Little Chef restaurant gained a Burger King but this closed in 2005.

The Little Chef closed in January 2012, as part of a crackdown on under-performing restaurants. It was taken over by Euro Garages later in the year, becoming a Starbucks. The tourist information centre also closed in 2014, later being purchased by local restaurant owners in 2016 who opened Masala Twist in the building in 2017.

The forecourt formerly included Esso's Snack & Shop store. This was changed to Hursts in 2015 when the site was acquired by MRH. MRH was then acquired by MFG in 2018, who rebranded the store to Londis in 2021.

There is an unsigned BP filling station and pub-restaurant opposite on the eastbound side. This pub-restaurant used to be part of the Crown Carveries pub chain, known locally as 'The Stonefield', before becoming part of the local Black Rooster Peri Peri chain on 24 September 2020.