44 photos in the gallery 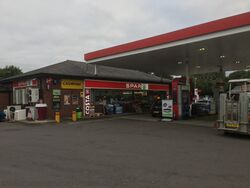 MRH was the largest independent operator of filling stations in the UK. They operated a large number of A-road services, as well as the forecourts at several motorway services. They formed throughout the late 2000s and the early 2010s following the merge of two large forecourt operators, Malthurst and Pace.

They were taken over by MFG on 21 June 2018 and the two have merged under MFG branding. 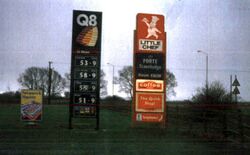 Malthurst was a dealer-group operating over 150 service stations in the UK, was one of the oldest and largest independent petrol retailers in the UK. They owned a number of larger service areas including the former Rainton site.

Kuwait Petroleum consolidated to form Kuwait Petroleum (GB) Ltd. KPGB then traded under the Q8 brand in its retail business and later as Q8 Fuelcare in its distributor sales business. In October 2004 KPGB was purchased by the joint venture company Refined Holdings Ltd, whereupon the company was renamed Pace Petroleum Ltd.

Under new ownership Pace Petroleum had already experienced growth with the acquisition in September 2005 of 60 Company-owned sites from Texaco.

Hursts was MRH's own-branded store, which was initially introduced to replace unbranded stores at their filling stations. Hursts' branding enabled MRH to It was significant because MRH could tailor the brand and its in-store offerings to stores which have different sizes and a different clientele. Most Hursts stores included Costa Express and microwaves.

Latterly, a separate brand called Hursts Grab & Go was introduced with most of Hursts' offerings but with more of a focus on food, as well as a selection of food concessions which include Greggs, Subway and Stone Willy's Pizza Kitchen.

MFG have now replaced almost all Hursts stores with Londis.