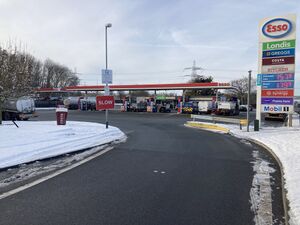 A2 westbound between Dartford and the M2

This is the Esso garage on the A2. For large services on the M25, see Cobham services.

Now a large petrol station at the side of the A2.

Prices are paid using PayByPhone. The location code is 59709. 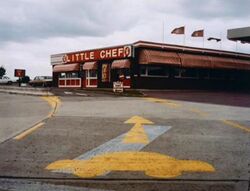 The eastbound Little Chef, pictured in 1982.

The field boundary at Clay Lane around Henhurst Dale happened to be the perfect shape to be turned into a service area many decades later.

The first sign of the current service station came in 1959, when a petrol station and transport cafe were proposed in the exact position of the current westbound service area. This would have been aiming to replace mobile vans and other businesses which were going to lose trade as the A2 was improved.

In 1968 the A2 through here was widened, and a service station soon opened on each side of the road. Both sides had an Esso petrol station and a Little Chef positioned close to it. The pair were known as Scalers Hill service station.

There were plans to demolish the eastbound Little Chef and replace it with a Travelodge in 1995. This didn't happen, but the restaurant eventually closed in 2007. The A2 was widened in 2009, and the tired-looking eastbound petrol station and its abandoned restaurant were both demolished. The site was fenced off but the slip roads remain in place for potential developers to use - in fact the signs there date back to before the forecourt was demolished. At the time both sides had a Snack & Shop and a Coffee Nation machine.

The westbound restaurant closed in 2007 too. The westbound filling station was rebuilt in around 2011, taking over the abandoned building to make way for a much larger forecourt. The site also received Esso's On the Run branding with a Costa offering in the process.

The site was sold to MRH in June 2015. They removed the Costa café but maintained the On The Run branding until 2017.

An extensive refurbishment was carried out to the shop in Autumn 2017, which saw its branding change to a Hursts Grab & Go and Greggs and Stone Willy's Kitchen concessions added. The store was later rebranded to Londis in 2020.

Under the plan for the new Lower Thames Crossing, this service area will be closed to make space for new flyovers.