A small forecourt now positioned away from the A2.

Parking and use of the forecourt is limited to 1 hour maximum stay and is strictly enforced. No HGV parking is available. 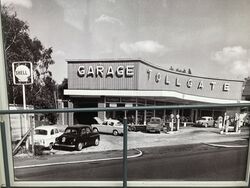 The former Tollgate Garage positioned on the old A2.

This garage is positioned at the historic junction of Watling Street and Wrotham Road. There was a turnpike here, and the Turnpike Inn (later Tollgate Motel) was built opposite - it's later closed in 2006.

In 1968 the A2 through here was widened, and Wrotham Road diverted onto a new alignment. The Tollgate Garage opened next to the eastbound A2, positioned at the old junction.

In 2009 the road was upgraded again, and moved south on to a new alignment. This meant the garage was now isolated on an old section of road, but it also meant traffic leaving the A2 in either direction could get to it via the improved junction.

The site was built by American fuel giants Amoco. By the late 1980s, the site had been passed over to Linnco Ltd. who had introduced a 7-Eleven store to the site. By 1992, the site had been sold to Elf who planned to redevelop the forecourt. In 1995, superseding plans were submitted which also included a motorists restaurant being built at the back of the site however these were refused in 1996 due to the increase in traffic the new facilities would create.

By 1997, the site had been sold to Petrol Hypermarkets Ltd. who owned the site under the Texaco brand. They renewed Elf's redevelopment plans but also submitted plans themselves to redevelop the site introducing a 'snack food' offering within the forecourt shop.

In late 1998, current site owner Simon Privett purchased the site who rebranded the site to BP and introduced a SPAR store to the site. In the mid-2000s, the site featured a blimp attached to the forecourt building promoting the site to A2 traffic.

Since 2017, BP Express have submitted three planning applications to the local council for a BP-M&S combo site and two-storey McDonald's drive thru to be built here. However, the current forecourt owner appealed against this and the plans were scrapped.

The filling station was redeveloped in March 2017 with an extended SPAR store and a larger Subway franchise, as well as a new Favorite Chicken franchise.