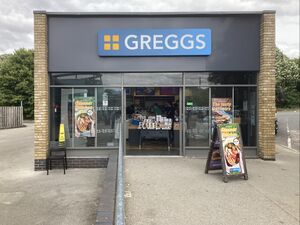 Wanting to increase their presence and market share, Greggs opened their first Moto-operated franchised bakery at Lymm truckstop in early 2012, with high hopes. Following good sales a second store was opened at Birch eastbound the following June, and it was then confirmed that most Moto services would get one. Moto have also been opening franchises at some Extra services.

What makes Greggs a little bit different to other new brands is that most units have been modified so customers can visit without entering the main amenity building. Additionally, where the Greggs unit is next to a seating area, there tends to be a barrier (or even signage, such as at Hilton Park northbound) which makes it clear that the two are separate. This helped Moto's tax accounts: by not offering the option of eat-in food, the food was exempt from VAT (although the notorious pasty tax complicated things). As with most service station franchises, prices are inflated and the menu is altered slightly.

In line with Greggs' rules, service stations in the West Country are not allowed to sell Cornish pasties, for fear of upsetting the locals. EG Group opened Cornwall's first Greggs at Saltash and it closed down very soon after. Despite widespread rumours that Cornwall had fixed a boycott of Greggs, a branch opened at the eponymous Cornwall services in October 2020.

Greggs had never agreed to franchised stores before the Moto deal, but following its success they opened franchises with Euro Garages, MFG and in some Moto petrol stations. Applegreen introduced the island of Ireland to Greggs by opening franchises at their service stations near Belfast. Greggs was now being added to petrol stations across the UK, and Euro Garages started introducing the country's first Greggs drive thrus.

Moto made a further investment in Greggs in April 2021, opening the motorway network's first full Greggs restaurant, with dedicated seating. This replaced an area which had been intended to be used as a full restaurant.

Other operators have responded to Greggs with the likes of The Cornish Bakery, Pret A Manger and The Pasty Shop.

Moto continue to hold exclusive access to the Greggs name on English motorways. As a result of their relationship with Applegreen, Moto's closest rival Welcome Break now operates Greggs stores on Northern Irish motorways and on English A-roads. Welcome Break intend to use Greggs across their A-road sites, with stores at Derby and the new Newark sites opening in October 2022. Moto's exclusivity deal comes to an end in 2022, with Welcome Break also eyeing up the brand for their motorway sites.

Greggs operate at many motorway services. They are: [view on a map -  Download KMLrefine search]

Moto have also started adding Greggs outlets to some of their forecourts:

In Northern Ireland, Greggs can be found at the following motorway services: 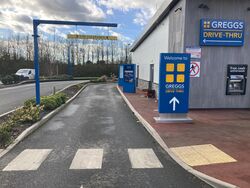 The Greggs drive thru at Ashby de la Zouch.

Greggs stores can be found at the following signposted A-road service areas:

Greggs has been removed from the following official service areas: