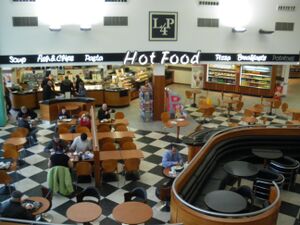 LP4 (standing for Le Petit Four, or The Little French Oven if you prefer) were set up at some shopping centres and Extra motorway services.

They specialised in French food which is then baked off in store, and replaced many Delifrance outlets. The outlets at motorway services branched out into serving full meals as well as snacks.

It 2012, Extra started phasing out LP4, mainly in favour of Moto's offerings of Greggs or Costa. By mid-2016, all LP4 outlets were removed from Extra sites, and in 2019 the two remaining sites in former Extra services were closed.

LP4 used to be found at the following service areas:

The original plans for Cobham had an LP4 outlet, but it was replaced by Welcome Break's Eat In.