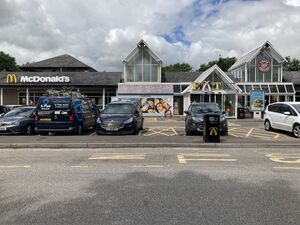 Cullompton is a small service area signed only from the northbound side. Southbound traffic can access it from J28 just like northbound, it's just that there are no signs. 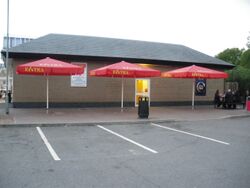 Cullompton is a very small service area built on land acquired by Margram, who leased the facilities out to BP and McDonald's. In common with other Margram services they didn't use their own name, but let the brands take the lead: this meant it was McDonald's who had their name all over the site and the motorway signage.

Additional, unrelated, "local facilities" are signed from the junction.

The service area was planned in 1993 by Boulevard Land Ltd. A Traffic Signs Agreement was signed, and then in 1995 the site was advertised for sale, when it was purchased by Margram, who designed the buildings.

It was built on the site of an old railway station yard. Space was left for the railway station to be reopened and turned into a park and ride site, but this was eventually turned into an overflow car park. In May 2020, the government finally provided funding to carry the proposal forward. It's still a long way off and now no longer clear if it will operate in connection with the service area.

Upon opening, the service area operated as two separate catering units, each with their own entrance. On the left was McDonald's and on the right was a vacant space, which soon turned into a Little Chef ran by their owners at the time, Moto. The two were linked by an internal corridor, which is where the toilets were. Fuel was provided by BP.

The Greater Exeter Strategic Plan, which is currently in the draft stages, is expected to propose closing Cullompton services, arguing that the area is too congested and that the land would be better used as housing. Land next to the M5 close to Poltimore House would be recommended as the site for a new, more modern, motorway service area that would replace both Cullompton and Exeter.

During planning, the Highways Agency raised concerns that there wouldn't be enough parking spaces (at 143), which would mean that it couldn't be signed as a motorway service area. In addition, they were concerned about the impact on the low-capacity motorway interchange here. Cullompton was given planning permission, as was another new motorway service area at the next junction, Tiverton.

This created another new problem, which was that despite two service areas having planning permission, policy at the time stated that only one of them could be signed from the motorway. Instead a compromise was reached where Cullompton would be signposted from the M5 northbound only, in exchange for Tiverton being signposted from the M5 southbound. However, the improvements expected of Tiverton never materialised, so the M5 now has one more signposted service area when going northbound than southbound.

When the service area opened there were several attempts to add totem poles to the site, which the Highways Agency described as a "disappointing" effort to unofficially attract southbound motorists.

In 2003, Cullompton was sold to Extra. Extra advertised Cullompton under their Gold Star name, but in practice very few changes were made since its previous configuration. It wasn't until 2007 that Extra branding started to be introduced, with most of the signage being updated in 2009.

In 2004 the Little Chef became LP4 - Moto were phasing out their Little Chefs at the time, and one they didn't even own the rest of the site seemed like a sensible place to start. In April 2012 LP4 became a Costa ran again by Moto. Shortly after LP4 opened, a glass shelter was erected around the entrance, to give the impression of it having a single entrance.

The BP garage transferred to Shell in 2008, in line with all other Extra forecourts.

A 2010 refurbishment saw the toilet block moved from the entrance to the back, allowing a new WHSmith to open in the middle. This removed all evidence of the original 'disconnected' layout of the service area. This also added a side-entrance to the back of the car park.

Warren's Bakery, a Cornwall-based bakery, was introduced to the service area on 26 May 2015. This involved covering up some of the glass frontage added in 2004, again masking the original layout.

IONITY electric vehicle charging points were added to the back of the car park in 2020.

The service area received considerable media attention in 2006, after it came last in Holiday Which? Magazine's survey, where they said it was "little more than a McDonald's next to a petrol station". They reported un-flushed toilets with broken seats and broken locks. Cullompton argued back, as reported on BBC News.

In August 2011, VisitEngland rated the service area as 2 stars, making it one of the worst-rated. It progressed to 3 stars in the May 2012 and March 2015 reviews.