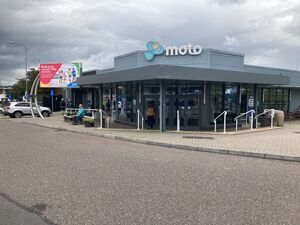 If you're heading deep into the South West, you'll need to get round Exeter. That's why Exeter services, positioned on the bypass, has become an important part of the 'staycation' experience. It's a completely different place during the holiday season - but at least it means you're nearly there.

First 2 hours free for all vehicles, after which cars must pay £15 and HGVs, caravans and motorhomes £27. HGVs can pay £30 to include a £10 food voucher.

Prices are paid using PayByPhone. The location code is 2436. 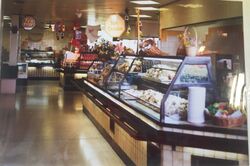 The restaurant servery in the late 1980s.

Firstly, Exeter is the most southern motorway service station in the UK, and it's also England's most western.

The route into the car park from the M5 southbound involves passing through eight sets of traffic lights. That's more traffic lights than you'll find at any other motorway service area, and enough to leave a lasting impression on your holiday.

It has the unusual challenge that its custom levels increase rapidly during the holiday season, where its car park and facilities quickly move from being slightly quiet to very overloaded. Despite it being such a busy site, there is still a large grass area which is used for picnics and dog walking, though it's probably too steep to be built over.

The Greater Exeter Strategic Plan, which is currently in the draft stages, is expected to propose closing Exeter services, arguing that the area is too congested and that the land is needed for housing. Land next to the M5 close to Poltimore House would be recommended as the site for a new, more modern, motorway service area instead. This would only be a proposal and would be a long way from actually happening.

During 2017, Moto began to redevelop the interior here with the large EDC restaurant removed and replaced by Chow and Arlo's. Costa also gained a refurbishment and a West Cornwall Pasty Company external kiosk was installed. The toilets were also refurbished, along with the addition of a Changing Places toilet.

The entrance was moved to a new extension in 2018, built on top of the old Costa outdoor seating area. This also allowed the West Cornwall Pasty Company store to be brought inside and the addition of a Costa takeaway only store.

A Costa Drive Thru opened at the back of the car park on Thursday 27 May 2021. A Krispy Kreme airstream pod was also introduced next to the amenity building entrance.

During Autumn 2021, Moto commenced a major refurbishment scheme here with a KFC opening on 6 December 2021 in the former Arlo's unit and the closure of the Costa and West Cornwall Pasty Co units inside the foyer to make way for a Pret A Manger unit, which opened on 10 January 2022. Moto also refurbished the toilets and showers in Spring 2022.

A new 24-bay GRIDSERVE electric vehicle charging hub opened here in March 2022. 12 Tesla Superchargers were also later added in December 2022 making this the current largest motorway superhub in the UK. Meanwhile, Western Power Distribution unveiled a £1million project to increase site's electric capacity, which they call 'Take Charge'. They say it will eventually allow an extra 80 chargers to use a total of 12,000kW of energy, via prefabricated substations. The equipment is being trialled until 2023.

The disused Ladbrokes building is expected to be taken over by Arnold Clark, as a car hire collection facility.