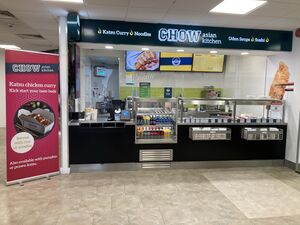 Chow is one of Moto's catering names, providing Thai and Asian cuisine in a market currently largely dominated by British and European names. It is a sister company to Chozen Noodle, although in practice Chow's locations are all operated by Moto.

Chow was first introduced to Reading and Leigh Delamere during the first half of 2016 alongside Arlo's, as part of a significant catering refurbishment. It continues to be introduced to further sites when they are re-developed. Towards the end of 2017, Moto decided to trial Chow alongside their existing EDC own branded restaurant instead of only partnering Chow with Arlo's, as Arlo's required considerable investment.

Chow can be found at some Moto services. They are [view on a map -  Download KMLrefine search]

Chow has been removed from the following service areas: