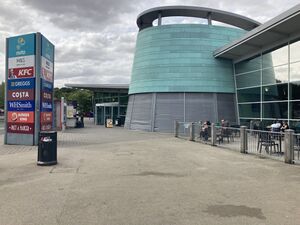 A large and airy new building that dwarfs the previous arrangement.

Prices are paid using PayByPhone. The location code is 2432. The fees are strictly enforced by CP Plus. 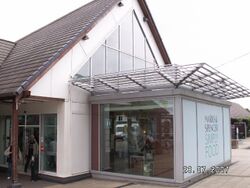 The entrance in 2007, with the supermarket-style design.

Cherwell Valley is one of very few service areas not be named after a precise settlement. At the time it opened, developers were paying a lot of attention to landscaping, and liked suffixes such as "Park", "Green" and "Valley" which helped create the image of a tranquil resting spot.

There is a very large dog walking area at the back of the service area, although its entrance isn't obvious and it was only recently given prominent signage.

The forecourt is operated separately, with its own food offer, including the motorway network's first ASDA store.

A 2011 report highlighted that Cherwell Valley had only a 6% turn-in rate, compared with 10% at Warwick.