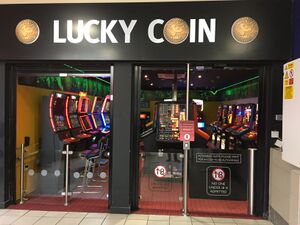 Many more photos in the gallery
Official Website:
www.moto-way.com/at-moto/gaming/

Moto's game arcades carry three names: Full Hou$e, Lucky Coin and &Play. Between them, there are arcade games and gambling machines, with prizes of up to £500-£1000.

The facility is thought to be highly profitable, mainly among lorry drivers taking a legal rest break. To ensure children are kept away, units are sealed and require the player to request access using a button before being checked by staff.

Recently, Lucky Coin has been scaled back in favour of the other two brands. &Play was given a new look in 2017, while Lucky Coin has a much more plain layout, similar to that of EDC. The letters of Lucky Coin are stylised to use coins which carry the Moto logo.

Regardless of the brand name, the entertainment centres are provided by Playnation on behalf of Moto.

Before Moto was created, the name Gscape had been used by Granada. This was created by BDG McColl and continued into the Moto era, with the one at Severn View lasting a further 10 years.

Lucky Coin, Full Hou$e and &Play can be found at many Moto service areas: