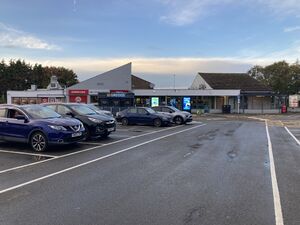 The M90's only service area is actually a tourist information centre in disguise.

Prices are paid using PayByPhone. The location code is 2445. 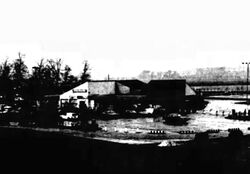 At the back of the car park is an ancillary building which is now used as a dog groomers - certainly unique for a motorway service area.

The service area has unusual origins.

It was built by Tayside Regional Council as what they called a "motorway information centre". They said it was aiming to take advantage of the tourism in the area, with four more sites planned for Scottish A-roads. It was branded Turfhills Tourist Centre and opened on 29 May 1979, at a cost of £16,000. It offered tourists caravanning, camping, a restaurant, petrol and go-karting.

One of those tourists was Granada's managing director, who was on a fishing holiday to Pitlochry. He thought the site had potential, and by 1981 Granada had purchased it. At the time they said it was being managed by "a locally based consortium".

Granada added a garden room to the restaurant and opened a Granada Lodge in 1987 on a spare plot of land. A large caravan parking area was converted into the HGV parking. An official report said Kinross could handle 20 HGVs - the lowest capacity for any motorway service area in the country (as of 1983).

By the time Granada was involved, it was definitely classed as a motorway service area. Given its unusual roots, Kinross was one of the first motorway service areas not to provide any breakdown facilities. It was also left with an unusual internal layout, where the restaurant and toilets are at opposite ends of one long corridor, running along the very front of the building.

The outbuilding at the south end was originally advertised as an 'information bureau'. It was extended and became a craft store and is now the dog groomers.

In 2010, Moto announced plans to rebuild the entire service area, replacing the amenity building with something much more modern and at the same time moving the petrol station and reorganising the car park. Moto claimed it would have helped Kinross town take more advantage of tourism in the area.

As part of the work, the entrance to the service area would have been converted into a roundabout, a change which had been recommended for a while. The new building would have included eight retail units, which Moto claim would have been rented to businesses with the profits covering the costs of the new roundabout. A sign was erected encouraging prospective tenants to come forward.

The work was expected to be completed in 2013 but was postponed indefinitely. The sign was still there until 2018, despite the postponement.

A M&S Simply Food store eventually opened inside the old building instead. A Greggs was positioned in a kiosk outside the entrance, opening on 3 March 2017.

Moto gave the amenity building a minor refurbishment in early 2022, redecorating the main corridor and updating the toilet and shower facilities.