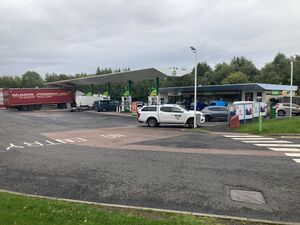 Head as far north as a British motorway will take you, and you'll find Broxden services, an unusual set-up that just about clings on to the end of the M90.

Short stay customer parking is available for cars at all facilities, with short stay HGV parking available at the filling station. 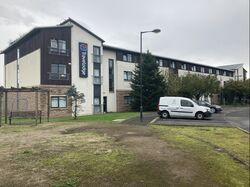 As with many modern A-road service areas, Broxden services is really a piece of land close to a very busy roundabout which has been turned into a series of developments, including restaurants, a hotel and a park and ride site.

The fact that the Broxden Roundabout also serves the end of a link road that becomes the M90 means that Broxden can add "serving a motorway" to its résumé, and as a result many maps and websites will tell you that this is a motorway service area. This would make it the UK's most northerly.

While there is a sign for Broxden services on the motorway, that sign is coloured white, confirming that Broxden isn't a motorway service area but a local facility which is only supposed to be serving the A9. This is reflected in the facilities it offers. White signs aren't supposed to be used on motorways in the UK, but if there was ever a place that was going to make an exception, it would be right the way up here, on a link road at the far north of the UK motorway network.

The Broxden Roundabout opened in 1978, but interest in building around it only grew in the 1990s, after the A9 bypass had been added to the junction.

Esso repeatedly applied for planning permission to build a large service area here. They were hindered by policy, because the local council and the national service station policy at the time both had a specific rule for the A9 that it shouldn't have any service areas, as people should be heading into the towns it bypasses instead.

They finally won planning permission following an appeal in 1998, but what actually materialised was less like a traditional service area, which was unlike impression the original plans had given. The service area opened with the Esso filling station, a Harvester restaurant which looks like a courtyard, and a Travelodge hotel that was a rare example of their new 'urban lodge' design being used at a service area.

The Travelodge was expected to be joined by a Little Chef, but this didn't happen.

Before the service area opened, a few other developers attempted to get involved. Compass (the owners of Moto and other hospitality brands) then applied to build their own service area on the site in 2002.

The new facilities were later joined by a McDonald's Drive Thru in around 2004. The restaurant received a refurbishment in 2011, reopening with a new outdoor seating area.

The Budgens store closed in January 2022, with temporary facilities being provided in portable buildings. The sales building reopened on 24 February 2022 as a Londis store with a refreshed Subway franchise and a number of new grab and go options. The forecourt was also rebranded from Esso to BP.