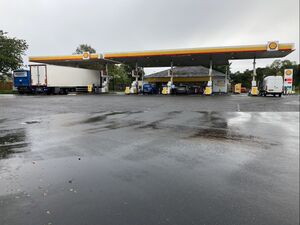 A9 south-westbound between Dunblane and Perth

Positioned in the open plains north of Stirling, Balhaldie has history as one of Scotland's busiest service areas. 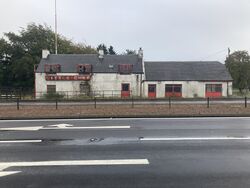 The service area is built across the boundary between Stirling and Perth & Kinross authorities. This caused a problem with alcohol licensing, as Stirling Council granted the southbound restaurant a licence to serve alcohol in 1994, but Perth & Kinross did not do the same for the northbound side, with the unfortunate implication being that somebody who really wanted a drink would have to cross the road.

There was a building to the east of the A9 at Balhaldie which has been there a long time - probably an old Blacksmiths. This became a garage, and in 1965 the A9 was upgraded to a dual carriageway and an accompanying northbound petrol station was built here.

The southbound garage was later taken over by Little ChefHistory in the early 1980s, with plans to add a 40-bed Travelodge hotel on land behind it in 1994, but these plans were later withdrawn.

A new southbound petrol station was built behind the Little Chef, moving the whole site south a bit. The original layout can still be made out by the shape of the car park at the north end, and the drainage line at the south end.

Despite all the problems the chain faced (and the unusual building it had inherited here), this branch managed to hang on to become the last Little Chef in Scotland. After Euro Garages took over it was one of the first to go, closing on 10 March 2017. It was due to reopen as a Greggs soon after but the only work that happened was that the building has been internally stripped out and now lays empty.

In April 2019, the fate of the unusual building was sealed as Euro Garages were granted planning permission to demolish the whole building and replace it with a new drive thru Greggs. A drive thru Starbucks, which was built on some land next to the car park, also opened on 24 May 2019. Shell are seeking to build three more electric vehicle charging points.

An additional northbound Little ChefHistory was built in January 1984 but closed in September 2012. It was extensively damaged in an arson attack in November 1990.

The building is a much more familiar 'small box'-style building. It was briefly replaced by Oliver's Grill and Diner, which opened in 2013 and closed less than six months after. The filling station closed here at some point too.

A Subway opened here on 22 May 2017, operated by Forbes Davidson. The building is now available to let.

Trustees of Kippendavie Estate proposed what they called a "motorway service area" at Lady's Mount, close to Balhaldie, in 1993. No further detail is available.

A legal challenge was then brought against the scheme, and the planning permission was revoked in September 2021. A number of objections had been received, including from Dunblane Community Council. Reasons given were that the A9 had a poor safety record, and that the proposal would detract from existing businesses. The timing of the decision was unfortunate, as it happened in the middle of the 2021 fuel crisis, during which a lot of people were talking about the lack of lorry parks being a major issue.