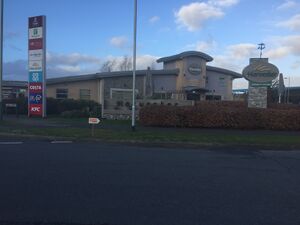 Harvester is a network of pub-restaurants, owned by the Mitchells & Butlers pub chain. Their restaurants are usually found in suburbs and retail parks, with faux-traditional styling and usually an adjacent motel.

In April 2013, Moto announced they were trialling a Harvester franchise at Donington. It provided the usual Harvester menu, including the salad bar, and Harvester's newly-added takeaway and breakfast options. This branch continued to operate as Harvester's only franchised restaurant, but with no plans to roll it out. In 2019, it was branded Harvester Express. In 2020, following the COVID-19 pandemic, the restaurant closed permanently.

Although Harvester has had very little history next to any major roads in the UK, it has been closely associated with them. It was created by Courage in 1983, who sold it to Trust House, who were themselves purchased by motorway operator Trusthouse Forte. Forte did not want to invest in it as a roadside brand; they were happy with their existing restaurants, mainly Little Chef.

In 1995 Harvester was sold to Bass, who wanted it as a rival to Whitbread's pub-restaurant chains. Bass expanded Harvester outside the south east, and sometimes paired them with Holiday Inn Express. All of the service station Harvesters opened during this era. An internal reorganisation means Harvester now falls under Mitchells & Butlers.

Harvester can be found at the following official A-road services: