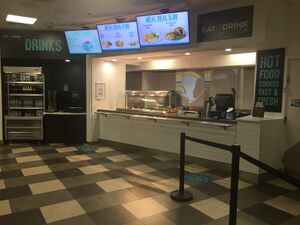 Eat & Drink Co. (originally shortened to just EDC) was Moto's own-branded catering option. It was possibly their last restaurant design which carried no particular theme: instead it tried to cater for everybody who didn't want a takeaway.

EDC was introduced to replace the poorly-reputed Fresh Express branding in 2008. While it had a new name and a new colour scheme, fundamentally EDC was exactly the same as its predecessor. In fact, the new brand was so bare, some believe Moto had introduced it on as little a budget as possible. It used a bland black-and-white colour scheme and carried very little imagery.

As part of the change, Caffè Ritazza was replaced by Costa. The new EDC branding was also extended to the previously unique Fork in the Road restaurant at Leigh Delamere.

EDC had to tackle a continuing trend facing service stations, where restaurants were making considerable sales during breakfast time but very little after that. As a result, many restaurants began to close after 14:00. Voucher codes and mobile discounts were offered to customers.

With sales continuing to dwindle, restaurants were refurbished to give more space to Costa, as well as other facilities such as Greggs and M&S Simply Food. In some cases this was enough to push EDC out entirely, even if this left a large area unused.

When Moto took over the restaurant at Leeming Bar in 2014, they surprisingly rebranded it into an EDC, but barely applied any actual EDC branding. This was short lived and the restaurant closed shortly after the minor rebrand.

While EDC appeared to be in a state of decline, Moto were experimenting with how their restaurants worked. New own-brands such as Arlo's and Chow were given much more investment, and looked set to push EDC out the picture.

In reality, EDC was part of that experiment. It was refreshed in 2018, with a new, cursive logo that used its full name: The Eat & Drink Co.. Although often smaller (or working part-time with another restaurant brand taking over in the afternoon), the remaining counter were refurbished with a level of style that they could have only dreamed of a few years ago.

Despite this, in autumn 2019, the remaining EDCs began to close in favour of snack-based catering options. By the end of 2019 only one EDC unit remained, Thurrock, which catered for truckers and hotel guests. Following the closure of the Travelodge hotel at Thurrock in 2021, Moto stopped supporting EDC and closed their last remaining EDC unit.