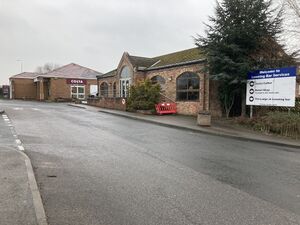 What used to be an independent service area has embraced the new era by becoming a Moto official motorway rest area, but recent events seem to have hit it hard. Be prepared that it's more than a mile away from the nearest junction, along what is at least a fast and pleasant road.

First 2 hours free for all vehicles, after which cars must pay £15 and HGVs, caravans and motorhomes £18. There is no meal voucher option for HGVs.

Prices are paid using NexusPay. The location code is 1985 for cars and 1986 for HGVs. 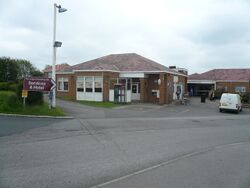 Leeming Bar may be much further from the motorway junction than one might expect, and the journey takes motorists past the unofficial service area at Coneygarth. In 2019 Ordnance Survey began marking Coneygarth as a regular motorway service area, while some scales show the actual site at Leeming Bar as only a "motel".

The road signs at A1(M) J51 imply that HGVs should use the nearby truckstop at Coneygarth, while everybody else should drive down to Leeming Bar. In practice, all traffic can choose either option.

Since 1961 Leeming Bar has been run as a family-run hotel, but in 2014 it was taken over by motorway operator Moto, with a view to turning it into a large motorway service area.

Inside, the redundant shop would have become the toilets, and be connected to the main building. A large, glass entrance would have been created at the back of the amenity building, which would take the visitor past three retail units and three food offers, before making their way through the extension to the toilet block. The extension would have had doors through to the hotel lobby.

Moto adjusted their plans in 2017. The external arrangements were largely the same, although coach parking replaced the manager's accommodation. The hotel would now stand on its own, but be converted to a Travelodge. The old café and restaurant would be demolished. The old shop would be left alone, and a new amenity building would be built next to the nature reserve.

The new amenity building would be a purpose-built, low building with a glass front. Greggs, M&S, WHSmith and toilets would be along the back wall, with seating, Costa and a "hot food counter" (most likely KFC) along the front. Moto made minor refinements to the plan in 2019, showing that they still had it in mind.

In 2020, Moto stated that they were waiting for news on Welcome Break's proposal for Kirby Hill and Moto's own proposal for Ripon before deciding whether to proceed with upgrading Leeming Bar. In the end Kirby Hill was awarded planning permission and Ripon wasn't, so Moto will now feel either that there is too much competition just 15 miles down the road, or that they want to take it on.

As part of a review of their facilities in this region, in May 2021 Moto's agents stated that their intention for Leeming Bar was for it to "remain as a rest area albeit the signage is to be upgraded to reflect what would be provided for a motorway service area".

Despite this ongoing ambition for Leeming Bar to be treated as if it were any other motorway service area, Moto closed the vast majority of the facilities in December 2020, in line amid tightening Coronavirus restrictions across the country. The facilities remained closed throughout the very busy summer of 2021 before just the Costa reopened in autumn 2021, with the small WHSmith store permanently closing.

While Leeming may be proud of its heritage and unusual layout, the limited facilities, remote location and increasing competition appear to have dampened any enthusiasm for investing in it. A statement from Moto in August 2022 said that they would battle the planned Catterick services by investing in Scotch Corner, but no mention was made of Leeming Bar.