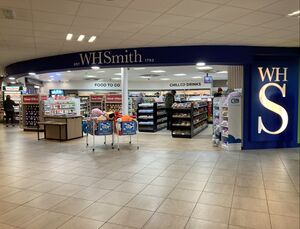 This is one specific branded shop. For service station shops in general, see Shops.

Almost every motorway service area in Britain has a WHSmith Travel store, usually operated by the service area itself, under a franchise agreement with WHSmith.

WHSmith's travel stores are different to the high street shops because they focus less on books and stationery, and more on snacks and travel accessories. Due to the way supplies are managed, travel stores will usually have a wide and surprising range of gifts too. Many people no longer have a reason to visit WHSmith's high street stores, and as a result the travel arm is the only time they ever see the brand.

WHSmith is often mocked for being a tired and old-fashioned brand, and regularly comes last in customer experience surveys. The travel stores have been its main growth area and a significant part of its continued success, but the service station stores are also partly responsible for the brand's reputation for outdated furnishings, unusual product ranges and inflated prices. Over 27,000 people follow a twitter account dedicated to highlighting the brand's lack of attention to detail. 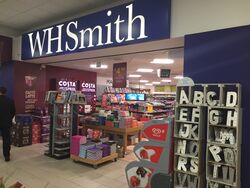 Novelty lettering for sale at a Roadchef WHSmith.

The exact stock varies depending on the operator running the store, and who their supplier is. Many of the service area stores are used as a customer service desk, selling parking tickets and shower keys, as well as being a payment point for different vending machines, such as Costa Express and Krispy Kreme. Their stock rarely fits just in the shop unit, and is usually strewn across the main foyer too, to try to attract more passing trade.

By selling coffee and food, WHSmith's travel stores make up a majority of a service station's legal requirements, and therefore the motorway shops are usually open 24 hours. Some operators have been known to sell scarecrows, wetsuits and garden ornaments, leading to ridicule and confusion from customers.

Customers of WHSmith's travel stores regularly comment on their inflated prices. This is true of their travel stores right across the country, but the ones operated by Moto, Welcome Break and Roadchef do tend to be especially expensive. There are some travel stores at other service areas which are operated directly by WHSmith, and these tend to have slightly lower prices, as well as a different product range.

The first reference to WHSmith on the motorway comes surprisingly early - in 1977, in fact. Roadchef were trying to point out that being a motorway service area meant being an expert in catering, fuel and retail, all at the same time. They then said that if they could go back and ask WHSmith to run their shop for them, they would. At the time the idea of franchising was unheard of on the motorway, but nearly 30 years later it caught on.

There was another false start in 1999. Granada revealed that WHSmith had expressed interest in forming part of their new motorway shopping centres. The partnership never materialised.

Granada's successor, Moto, would go on to be the first operator to work with WHSmith. While Moto had been using multiple shopping brands (and this hadn't brought much success), they still had a newsagent called "Shop", which was operated directly by Moto. These stores were a legacy of the original motorway shops, which had been heavily regulated on their size and could only sell items directly related to travel.

Moto trialled turning their Toddington shop into a WHSmith in 2007. WHSmith were keen to expand their travel arm at the time, and the trial was rolled out across Moto a few months later.

Welcome Break soon followed with a trial at Newport Pagnell and Roadchef did the same at Watford Gap. By 2009, it was everywhere.

The fact all three operators have the same store meant none of them had an advantage. As a result, they all left WHSmith to cover the essentials and worked on a convenience-store partner to run a bigger stores next door. Moto had already started with M&S Simply Food, Welcome Break started working with Waitrose and Roadchef found SPAR.

All Moto-owned BP forecourts (except Wetherby) have WHSmith branded stores within the sales shop. Welcome Break had done the same at Derby South, Oxford and Telford, but this has mostly been removed.

WHSmith travel stores can be found at many service areas. They are: [view on a map -  Download KMLrefine search]

WHSmith has been removed from the following service areas: