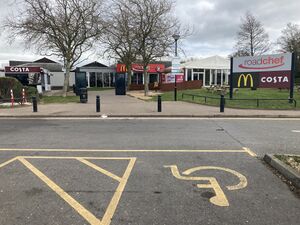 Despite the chaos and mania of the busy holiday period, busy Taunton Deane finds the time and space for a surprising amount of Somerset greenery.

Prices are paid using NexusPay or in the shop. The location code is 2247 (northbound) and 2249 (southbound). 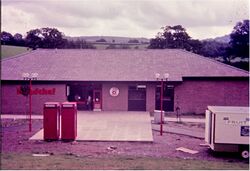 Taunton Deane is a prime example of the 'second era' of service station planning, where the government allocated huge amounts of land, to avoid the overcrowding complaints they had faced at previous projects like Strensham. While the buildings themselves can become crowded, the large grounds mean that Taunton Deane looks nothing like the concrete jungles at the north end of the M5.

The northbound Costa Coffee operates from a separate annexe building outside the main entrance. While the idea of stand-alone coffee shops has become a feature of motorway service areas in recent years, it's very unusual to see one that has been doing this for so long.

A search for services near Taunton considered sites at Shoreditch, Kibbear, Fulwood, Canons Grove and Cutsey. It was described as a "pleasant site in the flat bottom of valley with an excellent view of The Wellington monument."

Initially Cutsey wasn't considered, but on a second review it was decided it was the lest harmful place for it, so the service area was built here, on a 37 acre site. During the investigative period, considerable evidence of a deserted medieval village was found. Unfortunately, in line with the attitude at the time, little attention was paid to this and the evidence has now been destroyed.

The service area was opened to bids in 1971. Responses were received from Roadchef, Ross, and Rank. In 1974 Ross were declared the winners, but they pulled out so it was awarded to the new operator, Roadchef, with what the government called "lesser benefit". The name 'Cutsey' was changed to 'Taunton Deane'.

Given the large grounds and relatively low traffic levels, it was agreed that the new operator would only need to build facilities on one side of the road until that reached full capacity. As a result, when the southbound building opened in 1976, northbound customers had to cross the road using the long footbridge, although temporary facilities were sometimes available.

A northbound building was built next to the pathway in 1989. The new addition only has one entrance, as it feeds off the path that was already there. The newer building is the smaller of the two, and generally has shorter opening hours for its facilities.

Taunton Deane was one of three service areas deemed 'non-critical', which meant it could trial selling only two brands of fuel, instead of the required four. BP and Shell were the chosen two. After the restriction on fuel brands was totally removed, BP and Shell took one side of the service area each. Eventually Shell purchased the other side.

In 1989 a hotel was built on the southbound side. One was later planned on the northbound side but this never happened.

The service area used to use Coffee Republic rather than Costa Coffee.

The southbound amenity building was extended in 2019, to create more space and more units. A temporary structure was erected to serve as a seating area. Roadchef later purchased the structure from their contractor, and continued to use it as an overflow dining area.

A Costa Drive Thru opened on the southbound side in 2019 with its northbound counterpart joining in early 2020.

New Garden Square Deli kiosks were installed on both sides in June 2021 as well as a new Chozen Noodle kiosk on the northbound side to expand the food offerings available and to offer customers products without having to enter the main buildings. The northbound kiosks are also placed outside due to the lack of space inside the main building. Both Garden Square Deli kiosks were repurposed in summer 2022 to serve New York Bakery Co's range of bagels.