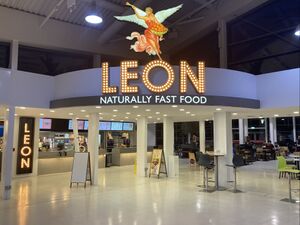 Many more photos in the gallery
Official Website:
leon.co

With motorway services offering more and more fast food, tackling the demand from health-conscious customers has become increasingly difficult. Roadchef wanted to resolve this by partnering with LEON.

Founded in 2004, LEON describes itself as a fast food chain, but its menu instead focuses on healthy food, with wraps, salads and snack boxes. The brand can already be found in high streets and railway stations, and was first trialled at two Roadchef services in 2018.

Following a successful trial, which Roadchef called a 'phenomenal success', in July 2019 a five year agreement was signed between the two companies and 12 more LEON restaurants are expected to open at Roadchef sites.

In addition to the franchises operated by Roadchef, in 2020 SSP opened two LEON restaurants at service areas ran by Extra.

LEON suffered greatly during the Coronavirus pandemic, as much of its business relied on serving customers on the move. The timing was especially unfortunate as LEON was just beginning to break through to become a major brand.

Roadside catering and supermarket giants EG Group purchased LEON in April 2021, who said they wanted to introduce LEON to a number of their forecourts.

They created LEON Drive Thru stores, with the first at a major service area opening at Red Post in December 2022. They launched LEON-branded coffee machines in spring 2022, as part of a trial that could replace their Starbucks on the Go machines.

Meanwhile, touchscreen order points have been added to LEON's restaurants, including at Roadchef sites. 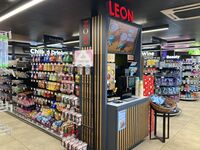 A LEON coffee machine within an EG Group ASDA shop.

LEON can be found at some Extra and Roadchef service areas. These are: [view on a map -  Download KMLrefine search]