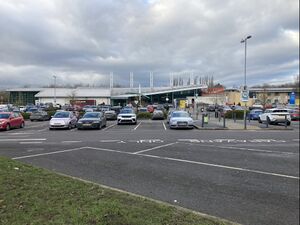 M6 Toll between JT6 and JT7

An exclusive treat for drivers on England's only tolled motorway, Norton Canes is a veteran of customer satisfaction surveys. Its fountains, picnic areas and choice of food draws in remarkable crowds for such a quiet road.

Prices are paid using NexusPay or in the shop. The location code is 2241. 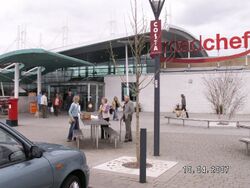 Despite the M6 Toll being one of the quieter motorways, Norton Canes is one of Roadchef's busiest and most profitable sites. This contrast was noticeable during the COVID-19 lockdown: when traffic on the main M6 disappeared, leaving the M6 Toll with very little trade at all.

In Spring 2018, Transport Focus calculated a 100% satisfaction score for the services, making it the top-performing site in the country. In 2019 the score fell to 'merely' 99%, but it was still top in the country. Which? Magazine's 2021 survey still spoke highly of Norton Canes, placing it in 4th place.

Despite this impressive résumé, by the 2022 Transport Focus survey, Norton Canes had slipped down to 67th place, with a still-impressive 93% score.

The site occupies 68 acres. The parking areas can accommodate 350 cars, 52 lorries, 25 coaches and 6 caravans, in addition to a 110-space overflow car park.

What's now the M6 Toll was first confirmed as a new motorway in 1991, with the contract to operate it won by Midlands Expressway Ltd. The path which had been reserved included provision for a service area which was officially registered in 1993 (sometimes erroneously called Chasewater services), when its planning application was rejected on environmental grounds.

Another site to the east of here was also examined, which became JT6.

In 1992 the government published a statement on service stations on "concession roads" (toll roads), explaining that motorists wouldn't expect them to have the same facilities as free motorways, and that they should have the freedom to become distinctive. They went as far as suggesting that in the future, privately owned motorways could compete on the quality of their service stations.

The Norton Canes site was taken to a public inquiry, and in 1997 permission was granted. Like the motorway itself, the new services would be owned by the Highways Agency but it would be the responsibility of Midlands Expressway Ltd. In 2002, they awarded a 25-year contract to design and operate the services to Roadchef, having also received bids from Moto and Welcome Break.

The services opened on 9 March 2004, shortly after the motorway itself. Roadchef described the site as "a new era in motorway services" with the site including a Costa Coffee store, Wimpy fast food unit, a reStore shop, 40 bedroom Travel Inn hotel and a BP filling station which included BP's third motorway Wild Bean Cafe at the time. The site also became home to Roadchef's flagship onRoute restaurant, allowing customers to watch their food being cooked in front of them in what they called "a spectacular food theatre". The restaurant had table cloths, and provided table service after 6pm.

The restaurant initially received positive feedback, although concerns were raised about the prices that came with it.

The HGV parking facility received a lot of attention, because this was something the West Midlands area was lacking, and many commentators suggested the provision was too small. In reality, after the first month, Roadchef reported that they were being visited by fewer than 30 HGVs a day, and that only six of their HGV parking spaces were receiving any use. The new motorway was being used mainly by cars.

Special attention was paid to the landscaping, with a short trail and a viewpoint being provided, as well as a series of fountains at the entrance.

When it opened it had a separate car park for local traffic, with a barrier separating the two (without that cars would be able to escape the toll by changing car parks). This meant it technically functioned as a local service area as well as a major motorway service area, even if it was never really used as such. By 2010 the local car park had been fenced off with only authorised traffic able to access it.

The filling station was one of BP's largest in the country. It was operated directly by them. 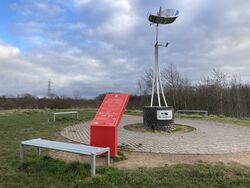 The Air Pulse Memorial situated within the services.

In December 2016, Roadchef and the M6 Toll owners added the 'Air Pulse Memorial' on top of the hill next to the hotel to celebrate the 25th anniversary of the Midlands Air Ambulance. The 4.6m tall sculpture was designed by local sculptor Richard Thornton, who has also provided a sculpture at Queen Elizabeth Hospital in Birmingham, with plaques around the sculpture explaining the reasoning behind its placement and information about the charity.

This isn't Roadchef's first involvement with Midlands Air Ambulance as their air base is located at Strensham northbound.

As Norton Canes is also home to Roadchef HQ, the site has seen a number of trials. The Bread Kitchen was trialled here in 2012 inside the Hot Food Co unit. The Fresh Food Café is also currently trialling products from Coco di Mama, an Italian food to go company.

The site also managed to hang onto Roadchef's final The Burger Company which closed here on 4 January 2016 to make way for a McDonald's, opening in March 2016.

The amenity building was extended and reorganised in 2017, providing space for a new SPAR store, additional indoor seating, a larger outdoor seating area and a new Leon restaurant.

The hotel previously included a Regus Express meeting room however this closed in 2020 following the coronavirus lockdown.