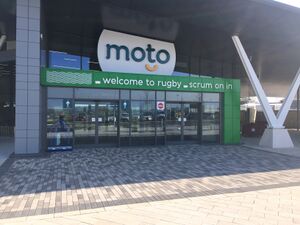 Moto (officially Moto Hospitality) is the UK's largest motorway service area operator. They were the first to introduce many brands and ideas which are now common at services across the country.

To encourage social distancing, Moto are now offering click and collect on some facilities. They are trialling a new fuel pledge at three trial sites, where over the summer of 2020 Moto's fuel prices will be competing with local (non-supermarket) petrol stations. 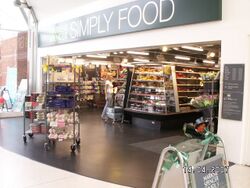 One of the M&S stores.

Moto's services date back to 1965. As a result, even though they are continuing to develop new sites, in many places Moto are constrained by old buildings, haphazard extensions and small sites.

Having previously displayed their partner's brand logos prominently - more prominently than their own - Moto have now tidied this up a bit, and they are refurbishing the entrance to their buildings to include a new lobby with dark grey colours and the name of the site. Since the change in management in 2020, it is noticeable that Moto are making a point of responding to feedback, which amongst other things has resulted in a high profile and very successful clampdown on litter.

Moto hold the unwelcome title of owning the worst-performing service area in all three Transport Focus surveys conducted so far. This may be skewed by their large number of sites, especially old or quiet ones. Their overall satisfaction score is usually one of the lowest too.

Many of Moto's predecessor companies weren't interested in fuel retailing. As a result, many Moto sites include a forecourt managed by somebody else - usually Esso. Despite this, Moto themselves do take an interest in fuel retailing, with them running fuel promotions, continuing to manage some forecourt-only sites, and even buying back the forecourt at Tiverton.

They have their own charity, Moto in the Community Trust, who help out the local area surrounding their services.

Despite several experiments, Moto have never really secured a sit-down meal format that worked. Instead their sites tend to be dominated by Costa units, as well as fast food partners, with recent additions being Greggs and KFC. Takeaway food units and drive thru coffee shops have an especially high turnover.

Some of their larger and older buildings look a little empty with only a few fast food options, but the evidence shows that sit-down restaurants like EDC and Arlo's weren't really working, except maybe at breakfast. During the first COVID-19 lockdown, Moto's brand partners all closed and they had to start serving their own food again - they were arguably the most proactive operator, rearranging their kitchens and creating a special menu.

In response to complaints that their food offer was too unhealthy, Moto have started introducing Pret A Manger stores, and their retail stores sell food and coffee too. Several site managers at Moto have told us they would like to see the traditional restaurant return, but they can't see it working just yet.

While the estate they inherited from Granada included a whole host of shopping names, under Moto these were almost all moved out. Instead, they were the first operator to change all of their own shops to WHSmith franchises.

Moto's biggest retail success has been the trial and roll-out of the popular M&S Simply Food chain, which when it was introduced it was described by critics as being "well worth driving on the motorway for alone". This partnership has proven to be very successful, and it has gone through several changes to keep up with demand, now bringing it closer to M&S's own stores.

Most of Moto's services have previously operated under the name Granada, as part of their hospitality and media empire.

In 2000 Granada attempted to bring things in order by merging with the Compass Group, and then separating Granada's media interests from everything else. The business was formally demerged in 2001, with Compass taking responsibility for its motorway and A-road services, operated under the subsidiary Compass Roadside.

Compass worked with Fallon, the company who helped change the image of Škoda, to improve the reputation of its motorway services. Without access to the Granada name, they created 'Moto', and promised to provide "a better, continental-feeling service". A deliberately simple name was used, and existing firms named Moto in Cornwall and Spain were paid to stop using it. Special attention was paid separately to how to serve children, pets, coach drivers and truckers.

The new Compass was itself a large business. As well as having acquired many brands from Granada, they had their own, including those ran by Select Service Partner. Compass were able to introduce these to Moto, such as Upper Crust and the groundbreaking M&S Simply Food.

Compass eventually sold most of its brand names, and in 2006 this included Moto, purchased by Macquarie Bank for an estimated £600 million. Previous decisions to fill Granada/Moto services with so many sister brands had complicated consequences: at some services Moto owned the car park but the now-unrelated Little Chef owned the building. Moto renegotiated franchise agreements with some of its former sister brands, but took advantage of being free to experiment with rivals too.

In 2004, their website stated that Moto had a 39% market share in the motorway services business, and served over 120 million people. 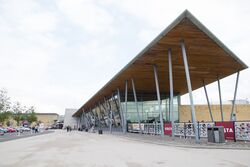 One of the new building designs.

Very few new motorway services opened in the late 2000s. Their project at Wetherby claimed to be the greenest service station in the UK, and uses a model which has since been copied by other Moto projects, most notably Cherwell Valley.

Also in 2008, they bought services at Winchester and tried to buy two First services, but the latter plan fell through. At this point The Times listed Moto as being the 57th biggest private company (dropping 9 places since the year before), with annual sales of £786m and profits of £52m.

In 2014, Moto acquired the independent services at Leeming Bar. Since 2016 they have developed plans for many new services, of which Rugby was built and opened in 2021.

Moto made several efforts to find a restaurant format that worked. Out went Little Chef and Fresh Express and in came two incarnations of EDC, the very thorough Arlo's, franchises from Harvester and Bar & Grill. None of these seemed to strike a chord with Moto, and instead fast food units took over.

Following their predecessor's acquisition of two separate truckstops in early 2000 to safeguard their market share against forthcoming road improvements in each area, those being Lymm and Barton Park, some Poplar 2000 branding was carried over from Lymm to Barton Park. The internal branding at each site has since moved towards the standard Moto affair.

The Moto branding at Bazzera Nord in Italy.

When Moto were introduced, Compass said they would be rolling the brand out across Europe, with up to 20 continental Motos opening. A 2001 report claimed that Moto ran 22 sites in Spain, Luxembourg and Italy, but this may have been a misunderstanding.

In March 2003, Compass entered into a joint venture with Italian firm Cremonini, to use the Moto brand at a new network of Italian service areas. A pilot Moto site opened at Bazzera Nord in July 2003, while 11 sites were rebranded from fellow Compass firm Autoplose.

The combined firm's intention was to expand fast: Italian motorway service areas were based on contracts, and hundreds of existing contracts were due to expire in the coming years. In total 31 Italian branches of Moto opened, and the partnership reported revenue of €110.6million in 2005.

The Compass-Cremonini partnership ended in May 2006, and Cremonini purchased the rights to use the Moto name for a further five years. In January 2007, Cremonini announced that their Chef Express brand, which had mostly operated on Italian trains, would be used to replace Moto that year.

Two service areas in Austria had been run by Autoplose and were now owned by Moto SpA, but the Moto name was never used there.

In France, Aire de Sarthe Touraine is the one site known to have been branded Moto. It provided a Caffè Ritazza, Flunch Express, Bonne Journée as well as Shell fuel. It was run with Cofiroute, a French motorway operator. The amenity building was more like a large forecourt sales shop, but the Moto branding was removed in 2008.

Moto's logo of a relaxed traveller (right) has been used ever since the company was first created. Their corporate colour was a shade of turquoise until 2015, when a monochrome colour scheme was introduced.

When the Moto brand was first introduced, each service station was given a tall sign by its main entrance, known as 'the goalpost'. This would rotate between several adverts for Moto, but now it just holds static logos, if it hasn't been removed all together. Moto now prefer a much smaller sign, listing all the brands available, and a giant digital advert from Admedia.

In June 2020, a totally new, simpler corporate logo was introduced. This was one of a number of minor changes to the public-facing side of the company which were observed. The new branding was launched very slowly, and wasn't really seen until Rugby services opened in April 2021, which saw new phrases such as "come on in", "happy travels" and other references to its smile emblem.

The new branding included an entire new set of car park signs, as Moto's external styling hadn't been thoroughly reviewed since Granada updated it all back in 1996.

Moto were the first of the operators to find a loophole in the law; by changing their operating logo to read 'Moto M&S Simply Food' at the appropriate sites, they could get around the strict regulations which prevented them from advertising their facilities on the motorway. Welcome Break and Roadchef soon copied this initiative. Following on from this, Moto went one step further by making their logo read 'Costa M&S', giving no reference to Moto on the headerboard at all. This was followed by 'Caffè Ritazza Burger King' for the services which didn't have a Costa. This initiative was put to an end with the introduction of Diagram 2919.2, which allows operators to advertise their brands on motorway approach signs.

Moto branding has been reduced within their services too, with even the large Moto logo by the motorway taken down. Some of the wider motorway signs began to use 'Greggs Costa M&S', the first to use three different brand names. Burger King and WHSmith were used if no other facilities are available.

With the new branding launched in 2021, there is some evidence of an effort to 'clean up' Moto's advertising, with more restrained totem poles and fewer billboards.

A list of services operated by Moto can be found on this list, or you can view them on a map. Some of the more unusual ones are detailed below.

Most people associate Moto with large motorway service areas, but as a result of the way Moto was created by breaking up Granada, they ended up inheriting a number of more unusual sites:

Extra lease out their facilities to other operators. Moto have taken on Greggs, West Cornwall Pasty Company, M&S units and Krispy Kreme stands at many Extra service areas.

Moto are understood to have developed unsuccessful plans for: