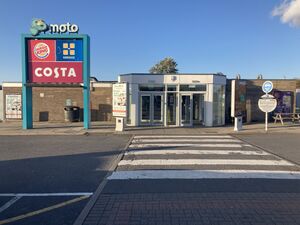 Moto own these small facilities at the Gonerby Moor junction.

Prices are paid using PayByPhone. The location code is 2440. 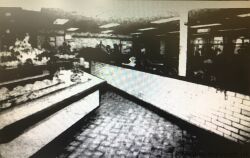 The site is known locally as Gonerby Moor services, after the name of the interchange.

The service area entrance is also used to access an adjacent Downtown superstore and garden centre. This land is due to be expanded massively into a designer outlet; they refer to the Moto facilities as the "north zone".

Granada renewed their lease on the land in 2000, allowing the service area to operate for another 25 years. The land's rent was recorded as £953,000 per year at the time.

The hotel here was one of several which were used by David and Jean Davidson, a retired couple who stayed in Travelodges almost every single night from 1985 to 2007. The pair booked in advance to receive rates as low as £9 a night, and found the lifestyle easier than maintaining their own flat, which wasn't wheelchair accessible. The accessible room in the Grantham North Travelodge was known as The Davidson Suite in their honour.

Moto will triple the size of the HGV parking area in 2022, which currently only provides 15 spaces, adding an additional 11 spaces to the current parking area and 29 new spaces next to the Travelodge.

Just south of Grantham at Spittlegate Level was the well known independent café, Tony's Café. When the Grantham Bypass opened in 1962, around 30% of HGVs were choosing not to use it, as they wanted to stop at Tony's.

Tony opened a new café on the A1018 close to the Gonerby Moor Roundabout, which was the northern end of the new bypass, in 1963. The government were keen to point out this impact on traffic was just a coincidence, and it was always planning to move.

There was a single, large parking area, with a fuelling area to the north, with a main building that was roughly the same shape as now, but with the main corridor being uncovered: the restaurant, shop and toilets all had their own doors. At the back of the parking area was an outstation used by the Road Research Laboratory.

The site was taken over by Trusthouse Forte in 1972. As of 2022 there is still a very battered, blue 'Services' sign on what was the A1018 (now the B1174), which probably dates back to this era. A new entrance was created directly from the A1 southbound.

Trusthouse Forte refurbished the site in 1984, adding The Granary restaurant and a forecourt branded Mobil. By now it was employing up to 110 staff.

As with all Forte service areas, it was branded Welcome Break in 1988. It soon had a Little Chef restaurant in addition to The Granary, as well as a coffee shop, a sales shop, a tourist information centre and a hotel branded Forte Travelodge. Little Chef was branded more prominently than Welcome Break. The land to the south began to be sold in the following years. 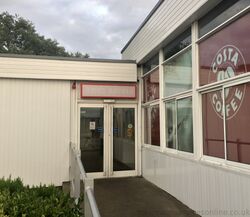 A Little Chef sign remained visible above the doors to the extended area, for a long time after the restaurant closed. The restaurant was on the right, now covered up.

When Granada acquired Welcome Break and were forced to sell all their motorway sites in 1996, Grantham was able to remain with them, and became a Granada site. As Granada already owned Colsterworth, to them Grantham was known as 'Grantham North'. Granada extended the building to add a Burger King, and around this time a roof was placed over the main corridor.

After Granada became Moto and its other brands had been split up, the Little Chef was closed. Part of it became Costa, but the kitchen and servery remain in place, behind the partitions.

A 1994 study found that the service area was 2x more popular with southbound traffic, as a result of the new entrance making it much easier to access on that side.

The road layout underwent major changes in 2007. The A1 was moved to the west of the interchange, with the old road becoming the southbound slip roads and a new bridge being constructed for northbound traffic.