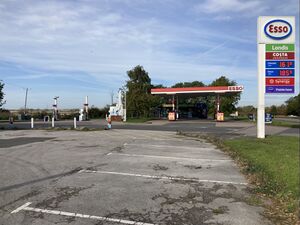 A1 northbound between Grantham and Newark

A small petrol station on the northbound side of the Foston Bypass. 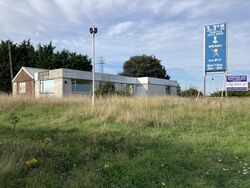 The site is sometimes known as Toll Bar services, a name that has been around for a while, but the current operator calls it 'Foston'.

It was built as a Heron filling station beside the Foston Motel, later mapped as Hyde-A-Way. This became a private dwelling, and a flat-roofed Little Chef restaurant was built next door in the 1970s.

That Little Chef closed in 2007, becoming Breakers Roadside Restaurant and, in 2012, LJ's Diner. LJ's closed in late 2013, leaving behind a cluttered shell. The building was home to a catering company for a while but is now up for let again.

MFG hold planning permission to demolish the former restaurant building and build a new Starbucks Drive Thru on the land, as well as four electric vehicle charging bays. This was approved despite National Highways raising concerns about the road layout.

The filling station went on to be owned by Malthurst. It was branded Texaco in the 2000s before rebranding to Jet in 2011. Following MRH's takeover of Malthurst, the site rebranded to Esso in 2015, retaining the Jet 'Shop' branding and colours. This remained until summer 2019, when the shop was rebranded to Londis.

The site appeared in the Highways Agency's truckstop guide, where it had eight chargeable spaces.