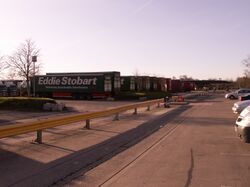 Truckhaven, one of the facilities in the guide.

For a brief period between 2006 and 2011, the Highways Agency published a guide to truckstop cafés in England, which was available in print and online.

Traditionally, HGV drivers had learned about cafés through word-of-mouth, adverts in driving magazines and by collecting business cards in a file. The Highways Agency's guide attempted to be a modern replacement for those methods, and was issued free of charge, along with driving advice.

The guide listed facilities which they said were "recognised by local authorities as rest areas for heavy goods vehicles". Many of these were official service areas, but only a small number of motorway service areas were included, generally those with dedicated lounges.

Data from the guide was included in several commercial road atlases. These atlases would often take similar data from Scotland.

The guide was discontinued in 2011, having published only a few revisions, and the highway authorities have shown no interest in publishing a successor. As it was published by what was a government agency, it is the closest England ever got to an official list of truckstops, even if the facilities at the places listed did vary considerably.

That guide has been replicated below, first as a map, and then below that as a list. The data is shown as it appeared in the guide, including any errors. As the official guide was last updated in 2011, it goes without saying that this should not be used for journey planning: many of these places have closed.

Where a listed truckstop is close to a place that is already documented in our own database, you can tap on its name to see its full write-up. On this map, the coloured icons usually relate to the road almost immediately outside the café: a small number of them are signed from more important roads, but most aren't.

That map has also been reproduced as a list. Again, any errors in the original data have been replicated, and it should not be used for modern journey planning.