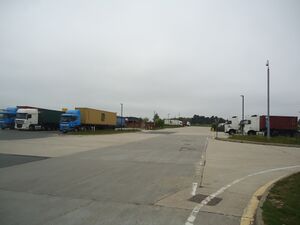 No photos tagged with Nacton Heath. If you have one, why not upload it?

Some time after the A45 Ipswich Southern Bypass opened, an exit was added between J57 and J58 for a future development at Purdis Farm.

Shepherd And Dog Piggeries, whose land it was, proposed building a service area here in 1988, having remarked that farming was no longer profitable. This opened in around 1994 as a Mobil forecourt and an adjacent McDonald's restaurant, known as Nacton Heath services. It is not clear if it was ever officially signposted from the road.

The Mobil branding changed to BP, and then in 2002 BP closed the petrol station. It was demolished and turned into Orwell Crossing lorry park.

Suffolk Coastal District Council issued an enforcement notice against the lorry park in 2005, arguing that it was not authorised to sell food to car drivers. Their position appeared to be that the slip roads in and out of the lorry park were not safe and the number of vehicles using them had to be kept low, even though the adjacent McDonald's was continuing to trade with a drive thru that only catered for cars.

The Highways Agency provided no road signs for the lorry park, for fear of overloading the slip road, leaving it as an unusual example of an exit with absolutely no information provided at all.

The McDonald's closed in 2006, with its site left abandoned until 2015. The former building was then used by Collease Truck and Trailer Rentals, who extended it in 2016.

The lorry park and its restaurant continued to trade until 2021, when it closed. The land was sold to create the new Orwell Logistics Park. The centre includes a new through route to Shepherd And Dog Piggeries, giving them access from the A14, rather than using their old level crossing.