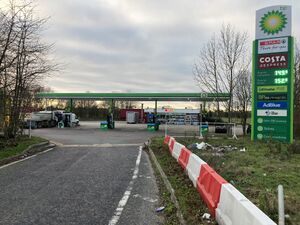 A120 westbound between Colchester and Harwich

The surviving petrol station of a pair which were originally provided on the road to Harwich.

Both filling stations opened in 1993 and were built by Texaco, with each sales building branded as their own-brand Star Market. Planning permission for Trusthouse Forte to build two Travelodges and Little Chefs on the adjacent land was later renewed in 1995, but they were never built, leaving a large area of unused land at the back of each site.

The eastbound petrol station closed in 2004, and was purchased by R. T. Steward Transport who demolished the forecourt and sales building and transformed the site into a haulage depot and a Highways Agency-approved truckstop with a café and 36 overnight HGV spaces. The site also became home to a local coach company for a time. The truckstop and café later closed in 2014, with the site being taken over by Veolia and a waste transfer station being built on the former parking area.

The westbound site continues to trade to this day, with the spare land being sold to the neighbouring farmer in 2012.

There are currently plans for a site refurbishment of the westbound side, which will see the existing pumps and canopy replaced, the sales building extended to introduce a food offering and 2 new electric vehicle charging points planned. However, before this refurbishment had been put into place, the filling station was rebranded from Texaco to BP in January 2021, along with gaining a new Spar Express store replacing the former Mace store.

With the construction of a new junction on the A120 planned to be complete by 2024, the route into this service area will be changing. A new junction will be provided to the east, and traffic will then need to cross two roundabouts, following the link road into the service area. The exit onto the A120 will use a new slip road from one of those roundabouts. The forecourt area will be increased.

A similar link road will be provided on the opposite side for access into the former service area. A new bridge at the junction means that, for the first time in almost 20 years, eastbound traffic will be able to stop here for fuel.