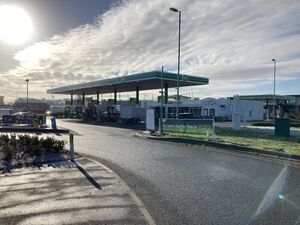 The new exit for Colchester Stadium and park and ride has its own service area.

There are no official HGV parking spaces, but HGVs often stop by the forecourt. 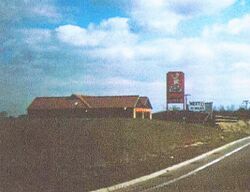 A low resolution view of the Little Chef, pictured in 1995.

Work commenced on the new junction for Colchester Stadium in 2010. Colchester Borough Council had sought permission for a new service area at this new interchange since 2001, to replace the outdated facilities slightly east of here.

As work on the junction started, BP began building their new forecourt. It opened as a BP Connect site with a M&S Simply Food store and Wild Bean Café.

Land to the west of the new forecourt was left clear for further development. In 2012, McDonald's submitted plans for a two-storey drive-thru restaurant to fill that space. This opened in late 2013.

Until the new interchange opened, the service area was positioned slightly east of the current site, on land owned by the adjacent Whitehouse Farm.

Mobil built a petrol station and Forte built the Colchester North branch of Little Chef, both opening next to the eastbound side of the A12 in 1990.

The site had a sharp entrance, which led to a wide forecourt with a long roof. Land was left in the north-eastern corner of the site for a 40-bed Travelodge hotel, but planning permission was refused. Despite the site being easily accessed, it was never officially regarded as a service area, and was just a facility beside the A12.

The Little Chef gained a Coffee Stop, and in 1996 was converted to a Little Chef Express with a short-lived blue colour scheme. Space was also left for a third unit. The forecourt was rebranded to BP after their merger with Mobil.

The Little Chef closed in 2006, after planning permission had been approved for the new service area. It was soon demolished, laving just the totem poles. The BP forecourt was closed and demolished in around 2010.