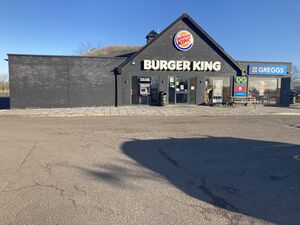 A pair of facilities on the A12, staggered some distance apart. 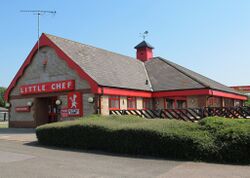 Although Feering services is only available on the northbound side, there is a Shell forecourt called Doggetts Lane close by on the southbound side. It was built on the site of The Trowel and Hammer and The Spaniard pubs, but it isn't officially signposted as a service area.

The first facility in the vicinity of Feering services was St Christopher Garage. It was positioned to the west, right by where the entrance from Kelvedon joins. This later took on Texaco branding, and is now the dwelling called St Christopher Bungalow.

An independent diner was built a little north-east of here. In 1986, this was bought by Happy Eater who demolished the building and re-built it. The new building had stone-effect walls, and a Happy Eater weather vane which outlived the restaurant.

Trusthouse Forte gained planning permission in 1990 to add a 40-bed Travelodge to the site however this wasn't added until 1995.

The restaurant became the Feering branch of Little ChefHistory in 1996, later gaining the Wonderfully British refurbishment and a Burger King in May 2015. The site continued to trade until January 2018 when Euro Garages' rights to use the Little Chef name expired so they rebranded it to EG Diner.

The EG Diner and Burger King both closed in August 2018 whilst the building was refurbished. The site reopened in January 2019 with a refurbished Burger King and new Greggs store.

The filling station was sold to Total in the mid-2000s, who later sold the site to Esso following their nationwide shutdown in late 2012. Esso then sold the site to MRH in late 2015 who redeveloped the site in early 2016, adding their own-brand Hursts store and a Subway franchise inside a much larger sales building. MFG later rebranded the store to Londis in 2020 after acquiring MRH in 2018.