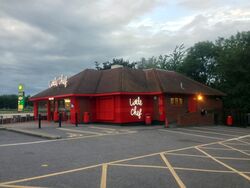 A repainted restaurant, with a new logo.

Wonderfully British is the name applied to a batch of refurbishments carried out to Little Chefs during 2011. The name builds on Little Chef's effort to establish itself as a British institution, as the brand was now 53 years old.

It was the highly-anticipated sequel to Heston Blumenthal's well-received refurbishment work, and claimed to have built on lessons learned from it. In reality, it was a scaled back version of Heston's work, but some would argue that many of his features were novelty gestures that were never going to get rolled out on a large scale.

The refurbishments saw each restaurant painted bright red, and have a new logo with a curly font applied. The restaurants would be closed during the refurbishment to allow each one to be thoroughly stripped out. The popular blue-sky ceiling, new furniture and tiled walls and floors. Each restaurant gained a 'grab & go' takeaway counter called Good to Go.

The branches selected for refurbishment were the ones with the most untapped potential, but not necessarily the most profitable.

Nine refurbishments were initially carried out, with Fontwell following a few months later. With more branch closures planned, RCapital argued that a smaller estate would make it easier for them to bring all of their restaurants up to the same standard. This implied that all restaurants would soon take the 'Wonderfully British' format; we do know that a list of at least 15 more branches was drawn up.

While the Wonderfully British format had improved the appearance and the fortunes of the restaurants selected, senior management were expecting profits to increase as much as they had done at Popham. That was never going to happen, because Popham had an unlimited budget and a lot of TV coverage. As a result, they were disappointed by the impact of these 10 refurbishments, and didn't roll it out any further.

In 2012, a smaller-scale refurbishment was carried out at Winterbourne Abbas. This had a very similar theme to Wonderfully British, but was missing a few features including the Good to Go counter.

Under new owners Kout Food Group, Lolworth received that same treatment in 2014, and Feering in 2015. This would be one of the last major refurbishment carried out by Little Chef.

The following restaurants received either the full 'Wonderfully British' refurbishment, or the smaller-scale follow-up: