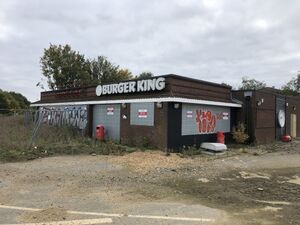 Lolworth services was positioned on the A14 westbound, just beyond the Bar Hill exit. It was sometimes known as 'Bar Hill services' as a result. The restaurant operated in tandem with its eastbound partner, Swavesey.

An existing transport café, itself a converted property, was positioned next to a forecourt named after Bar Hill, which at the time was on the A604 road. Little ChefHistory turned it into one of their restaurants in around 1970. The restaurant had three pitches to its roof, and was painted white with red stripes.

In 1985 Forte moved and rebuilt the building in a more modern style, with brown bricks and a low roof. There were plans to add a Little Chef Lodge at the time; the initial application was refused but it was advertised as opening in 1988. It possibly opened as a Travelodge.

Lolworth gained a Coffee Stop in the 1990s, which became a Café Nescafe and then Burger King, and was then later removed. The place tended to get overlooked, because all Little Chef's investment went down the road to Fenstanton. In 2014, Lolworth Little Chef was finally treated to a major refurbishment, the first to be done by Kout Food Group. This work saw the Burger King reinstated, which was a great delight to staff who had fought hard for Lolworth to get its mojo back.

The filling station was branded Fina, who called it "Lolworth service station", with "a PUNCH station!" written across its canopy. It had just two filling rows, and a small sales shop to the side.

The filling station was the scene of a terrible incident on 17 November 1990. A collision on the A14 led to a lorry leaving the road and careering through the forecourt and into the shop. One customer inside the shop was killed. While a fire did break out and rage for two hours, staff at the forecourt were praised for spotting the HGV as it was heading towards them, and remembering to isolate the tank before they ran, preventing a potential explosion.

The forecourt reopened as a Total, changing to BP in 2012. It was operated by MRH and had an unbranded shop and a Costa Express machine.

Lolworth services was on borrowed time for a while. It benefited from becoming part of the cross-country A14 route in 1994, but at the same time it was announced that the new and dangerous A14 would be replaced by a new motorway, the A14(M), and the small service area at Lolworth was unlikely to be part of this. A much larger service area opened nearby at Cambridge in preparation, reducing the demand for Lolworth.

That project took some time to come to fruition, but the restaurant, which was now under the ownership of Euro Garages, and forecourt eventually closed on 14 May 2017. From this point, signs on the A14 advised traffic that there is "no fuel or services", while a sign for Cambridge services was erected a few miles before. The Travelodge did solider on, but it eventually closed in early 2019.

After the new A14 opened in May 2020, the old Lolworth site stands abandoned and isolated. Even though the finished road never opened as a motorway, it's still built to motorway standards, and those standards wouldn't allow for an exit to be provided to a service area so small and so close to the Bar Hill junction.

It is possible that when the bridleway is finished, access to the old car park may be possible via that. It is likely that the land will eventually be cleared and become part of the neighbouring industrial estate.