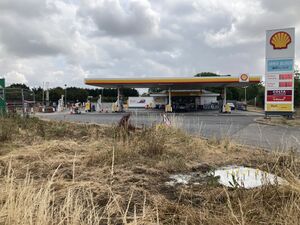 22 more photos in the gallery
Location:

After the new A14 opened in December 2019, Fenstanton services sits stranded on the old road, continuing to provide minimal facilities for local traffic. 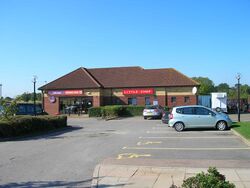 Fenstanton was built in 1989, located on the eastbound side of the A14 Fenstanton Bypass, within what was known as junction 27. The entrance is direct from the road while the exit leads to the old Cambridge Road. It became widely known as Huntingdon services.

Upon opening it offered the common combination of a Shell forecourt, a Travelodge hotel and the Huntingdon branch of Little ChefHistory. This restaurant was the eastbound partner of Abbots, built a few miles to the west, and opened at the same time.

The Huntingdon branch was later painted blue by Forte in an attempt to attract more formal diners in the evening. When Granada took over they undid this, but they kept the furniture and introduced a Burger King franchise. The building was severely damaged by a fire on 31 July 1996, and reopened at the end of the year.

In 2006 a Coffee Tempo! was added, but in 2012 it became a Little Chef Express. By this stage the restaurant was performing poorly, but it underwent a major internal change-around which saw its fortunes change. It became a well-regarded site and was shortlisted for the Wonderfully British refurbishment in 2011, but that idea fell through after landlord issues.

The restaurants were taken over by Euro Garages in 2017, who only had limited use of the Little Chef name, and were expected to change it to Starbucks. Starbucks wouldn't have wanted to share the building with the Burger King, and as a result the Little Chef changed to the temporary name EG Diner in early 2018.

The EG Diner and Burger King both closed in summer 2018 for refurbishment and later reopened as a Burger King, Subway and Greggs combination site.

On 9 December 2019 the new A14 opened, and the old A14 past Fenstanton became a local road called the A1307. The 2021 Ordnance Survey maps continue to show the site as a rare example of an official service area on a local A-road.

The recent refurbishment may have given the impression that EG Group were confident of attracting local traffic. The early reports weren't so convincing, and in early 2020, the Greggs and Subway stores both closed, having reported a significant drop in custom. The remaining Burger King was forced to close for the start of the COVID-19 lockdown in March 2020, and the following year it was announced that this closure would be permanent. This leaves the amenity building completely empty, but for the time being that building is still owned by EG Group.

Despite the site's mothballed appearance, Shell commenced construction on an eight-bay Shell Recharge electric vehicle charging hub in summer 2022, next to their forecourt. These chargers are expected to go live in early 2023.