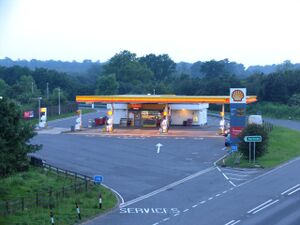 This was the service area at Hemingford Abbots. For Abbotts Wood, see Wittering.

A simple Little Chef and petrol station was set up in the middle of a junction on the A14, but is now abandoned. It was the westbound partner to Fenstanton.

The road is here an old Roman Road. It started out as the A604, but became famous when it became part of the main A14 route to Felixstowe.

The exact location of the service station was once an orchards, next to the Rampant Lion Beer House. This was positioned on the Cambridge Road opposite the junction with Rideaway.

By the 1970s this had become Lion Garage, later Abbots Garage. It was owned by the independent 'Abbots service station'. The garage was east of its later position.

In the 1980s the road was upgraded to a dual carriageway, and the loop was built around the garage, with a new exit road.

With traffic levels increasing, the site was purchased by Forte in the late 1980s, at the same time as Fenstanton. Forte re-built the petrol station, and built the Hemingford Abbots branch of Little Chef.

The Little Chef lasted until 2007, when Little Chef fell into administration. A new owner was found, but Hemingford Abbots was one of a number of branches excluded from the sale. It was re-opened in October 2008 as an independent diner, who branded it 'Hemingford Abbots services'.

The independent diner closed and became Hot Tubs Direct, who closed in 2011. Shell then closed in 2012. They removed their branding and arranged for the forecourt to be demolished later in the year. At this point the Highways Agency took the three 'services' signs down and put a barrier across the slip road.

The former restaurant is now boarded up and covered in graffiti. The A14 here was replaced by the new road in December 2019, making this site unattractive for a new service station operator.

As a result, the restaurant building was purchased by a local garage owner in early 2022 and is currently being refitted to become a body repair workshop.