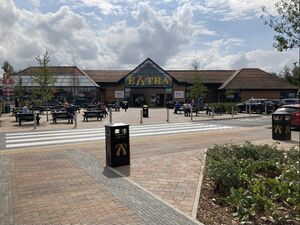 The upgraded A14 has its own large service area that was already built and raring to go. 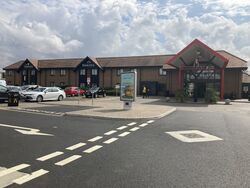 Cambridge services is positioned extremely close to the Meridian line, which crosses the A14 by the eastern slip roads. It's the only current service area to have that unusual distinction.

The service area opened on 1 December 2000 and became the biggest and busiest of Extra's first three developments. They said that most of the units would become conference facilities and they would not use franchises. Strictly speaking they haven't used their own franchises, but they've leased units out to other firms who have them.

Significant changes to the parking layout were made in 2021 and 2022, aiming to increase capacity and reduce the number of HGVs parking on access roads. This was set to involve creating a lengthy new exit for HGVs, but that aspect of the plan was dropped. During these works, the amenity building was also refurbished including upgrades to the toilets and showers as well as a new children's play area and a new multi faith room.

Shell were granted permission to build six IONITY electric vehicle charging bays next to their forecourt in April 2021. These would be in addition to the four already available in the main car park (and the two which aren't in use).

Extra hold planning permission to build a drive-thru coffee shop here. This will be a Moto-operated Costa Drive Thru and is expected to built beside the site exit in 2023.

Early facilities included a McColl's newsagent, Texaco filling station with Somerfield store and a Days Inn hotel. The filling station was sold and rebranded to Shell in 2008 whilst the hotel was refurbished and became a Ramada hotel in July 2015.

The site has been the host to a number of trials over the years including a Ben & Jerry's kiosk in its earlier years. More recently, Ed's Easy Diner and a Wafflemeister kiosk were both trialled here alongside Extra's sister site at Peterborough, but both these units closed in 2019. Wafflemeister was replaced by Sweet Barrels in late 2019 which also later closed itself in March 2020 following the coronavirus lockdown. 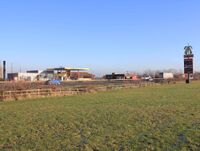 Concerns were raised in the late 1980s about HGV drivers struggling to find places to park in this area, and sometimes behaving inappropriately. This problem was set to become worse with a plan to upgrade the A14 here, and traffic levels only expected to increase.

After ruling out building at Bar Hill, in 1991 Texaco received planning permission for a new service area here. It would have been a much smaller site set far back from the roundabout, but still with a separate amenity building, likely to be leased to another operator. A 100m development-free zone was established next to the services, to leave room for the planned A14 upgrade.

With confusion about when the A14 was going to be upgraded, whether it would be a motorway or whether it wouldn't happen at all, Texaco didn't go ahead with their plan. In 1996 it looked like the road wasn't going to be upgraded at all, so Extra came up with a plan similar to what was eventually built. The 100m development-free zone continued to be respected. There were a number of concerns that the development would be inappropriate in this area, but planning permission was still granted. It was renewed with a new proposal in 1999.

Cambridge service area was built very close to Lolworth services, which was regarded as being fine for cars but too small for HGVs. The presence of Cambridge as a large competitor caused Lolworth to scale right back, and eventually close.

When Cambridge services opened, blue signs were mistakenly used, instead of the correct (at the time) green signs. The incorrect signage implies that Cambridge is a motorway service area, when there is no motorway for it to serve. Some listings have referred to it as being at the end of the M11.

In 2016, work started on a new project to upgrade the A14, utilising the protected empty zone. The new road has a larger junction at Swavesey, marginally increasing the journey time between the road and the service area. In 2018, it was announced that Highways England intended to open the new road as a motorway. Cambridge committed to meeting the standards required of an MSA, and blue motorway signs for "Cambridge services" were drawn up.

The plan to open the upgraded road as a motorway was dropped in October 2019, meaning Cambridge services can continue as it has done as a regular A-road service area.

Despite that, in April 2020 Cambridge managed to be the only A-road service area included on Highways England's short-lived list of motorway service areas. It seems Cambridge's efforts to sneak itself into the motorway classification are never going to end.