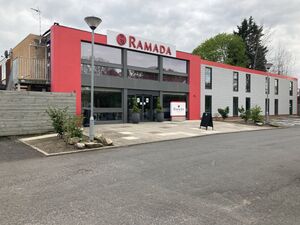 Ramada is a worldwide hotel brand. In September 2013 it was announced as the new name under which Welcome Break's hotels would run.

Initially only a few Ramadas sprung up, as part of refurbishment programmes and upmarket facelifts. The aim is to provide a higher standard of service than one might find in the other motorway hotel brands, especially now Days Inn is used by two different operators. Instead the Ramadas have an on-site bar, named Junction Bar & Grill.

In June 2017 Welcome Break revealed funding had been secured to open more Ramadas, and hadn't ruled out knocking down old Days Inns to make way for them. The expansion includes hotels at Extra services which Welcome Break run.

Welcome Break already had a licence to operate the Days Inn name from American owners Wyndham, and Ramada is owned by the same company. Wyndham also own the American arm of Travelodge, but not the British version that is Welcome Break's biggest rival.

In June 2019 a new Welcome Break Ramada opened in East Kilbride. New owners Applegreen have said it's likely their future business model will include more hotels, though they did briefly consider selling them off.

Ramada can be found at some Welcome Break and Extra services: [view on a map -  Download KMLrefine search]

Unrelated to the Welcome Break franchise, Jarvis Hotels used to be the UK's largest Ramada franchisee. These operated as Ramada Jarvis between 1996 and 2011, when they went into liquidation and the hotels were sold on. One of these formed part of an official service area: