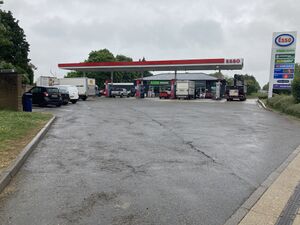 A31 eastbound between Guildford and Farnham

Hogs Back's impressive hotel is accessible to A31 traffic in both directions, but westbound isn't signed as it requires a long detour. 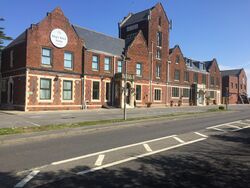 The Hogs Back Hotel.

The Hogs Back is a narrow elongated ridge which runs between Farnham and Guildford. It has given its name to the A31 between the two and to the hotel here, and now this service area has borrowed that name.

The services consist of a hotel and petrol station on the old alignment A31, which also takes in a couple of houses and a bus stop. Both premises have been there a long time; the hotel started as Poylehill House and became the Hogs Back Hotel in 1935.

Behind the petrol station were two properties, Doone House and Ridgeway, which were later demolished. There was a Happy Eater which became a Little Chef in 1996. This closed in 2004 and was demolished to make room for an expanded forecourt.

On the other side of the road, among the houses, was the Farnham branch of Little ChefHistory. This was a transport cafe which became a Little Chef in the 1960s and closed in 1993 when the new road opened. It was later demolished.

The forecourt was previously operated by Esso themselves and became one of their On the Run café sites which offered Costa. In 2015, the site was acquired by Euro Garages who added a SPAR store and replaced the On the Run café with Greggs and Subway stores. The building was expanded in November 2019 to bring it in line with other Euro Garages forecourts.

The hotel was formerly part of the Legacy Hotels chain until 2016 and, before that, was branded as a Ramada Jarvis Hotel in the 2000s. Eight Tesla Superchargers were added to the hotel car park in August 2022.

Euro Garages rebranded the SPAR store to Sainsbury's On the go in 2020 as well as altering the internal layout, relocating the Greggs and Subway stores in the process. The store then rebranded again to ASDA On the Move in January 2022, and a new Cinnabon kiosk was also added and opened in February 2022.