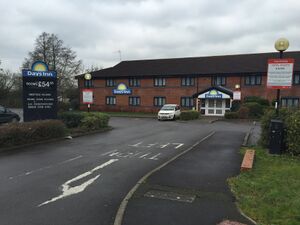 After Welcome Break had split from Granada, they needed to make some changes to stand out as an operator.

In 1999 they announced their hotels would be branded Days Inn, a name used under licence from the brand's American owners, Wyndham via the British franchise owner, Premier Hotels.

Most Welcome Break hotels were first used by Travelodge, and had retained the 'ultra low budget' styling that was common at the time. Under the Days Inn brand, Welcome Break wanted to demonstrate that they were refurbishing each location to a much higher standard, while keeping prices low.

A flagship new branch was built at Oxford, and £18million was set aside to refurbish existing properties, with the aim being to have 35 hotels open by the following year. In reality progress was slow, and it would be another 10 years before Days Inn replaced Welcome Break's existing lodge brand, Welcome Lodge.

The licence saw Welcome Break actively promote other motels which they ran under the Days Inn name, including one at Waterloo.

After Welcome Break's success, Days Inn's motorway operations took off. Moto introduced it to Wetherby in 2008 and had planned to open one at Cherwell Valley and Stop 24, but those plans fell through. The Days Inn brand was used at Barnsdale Bar after the Travelodge was sold.

In July 2009, Welcome Break took over three Purple Hotels at Extra services they re-branded them as Days Inn. Meanwhile Roadchef changed all their motels from Premier Inn to Days Inn under a separate arrangement in September 2010, hoping for an increase in sales.

In June 2017, funding was secured to convert more Welcome Break Days Inns to Ramada, and this process continues slowly.

In August 2019, Welcome Break's new owners considered selling all of their hotels, as the firm would be focusing on fuel and food, but concluded they were good for the business.

Days Inn operate at some services. They are: [view on a map -  Download KMLrefine search]

Days Inn used to operate at: