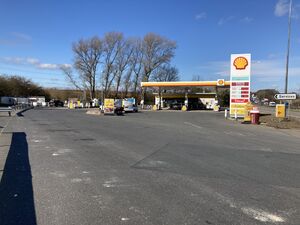 A1 between Doncaster and Pontefract

Barnsdale Bar southbound was once one of Forte's star attractions, but it has now descended to a typical pair of petrol stations. 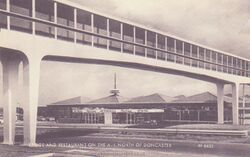 The southbound amenity building in the 1960s.

The service area is divided between two districts: Selby and Wakefield. The boundary line runs up the middle of the A1.

23.5 Degrees submitted plans to build a Starbucks Drive Thru in the former southbound hotel car park in January 2019. This was superseded by a new proposal which showed a Starbucks Drive Thru and associated parking in the same position as before, but also allowed the derelict restaurant building to be demolished and turned into a McDonald's Drive Thru restaurant. There would be two more stores (planned to be occupied by Greggs and Subway) within the hotel car park.

The Starbucks car park is also planned to include 6 electric vehicle charging points, positioned in front of the existing hotel building which is expected to remain. Highways England have raised concerns with the proposals.