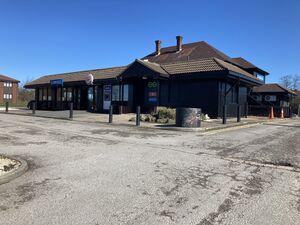 A1 northbound between Doncaster and Pontefract

A Euro Garages takeaway on an old and constrained part of the A1. 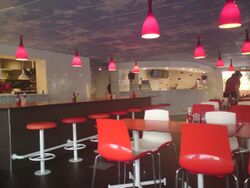 Inside the former Little Chef restaurant.

This service area started out as a café in the 1960s called The Haven. This was placed at the busy Skellow Cross Roads, an important junction which had another garage on the opposite side of the road.

The café was purchased by Happy Eater and, with a Texaco petrol station built next door, the site became known as the Doncaster services (although it was sometimes called 'Skellow'). The main building looked like a large house, with a large extension at the back. A Travelodge was later built next door.

The restaurant was converted to become the Doncaster branch of Little ChefHistory in 1996. It received investment including air conditioning and a blue colour scheme to try to attract evening diners. That concept was removed after a couple of years, and the building was instead painted white with red features. A Burger King franchise was also in place for a while.

The Happy Eater was visited by then-Prime Minister John Major in February 1991. The press were disappointed that he left without leaving a tip. Major came to be closely associated with the Happy Eater brand.

The Little Chef featured a dedicated coffee shop, which became a Burger King and then Coffee Tempo!. The building was refurbished again in 2012, when it gained a Good to Go takeaway offer. The Burger King reopened in 2015.

The forecourt was acquired by Malthurst in 2010 who rebranded the forecourt from Texaco to Esso. At this point, the forecourt became known as White Rose. The site was later transferred to MRH who added their own-branded Hursts store in Autumn 2015. This later went onto become a Londis store in 2020 following the site transferring to MFG.

Euro Garages' rights to the Little Chef name expired in January 2018, so the restaurant was quickly changed to become EG Diner. The EG Diner closed in July 2018, with Greggs opening in its place in September 2018. Under Euro Garages' ownership, the building has been painted black, and the trees at the front have been cut down. This inadvertently revealed the space where a 1960s building was.