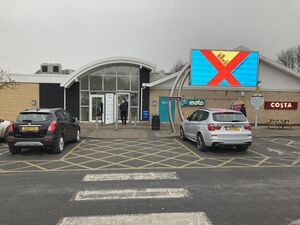 Small services at the bottom of the Doncaster Bypass, or top of the Blyth Bypass if you prefer. It's no longer accessed directly from the A1, but from the new interchange next to it.

Prices are paid using PayByPhone. The location code is 2428. 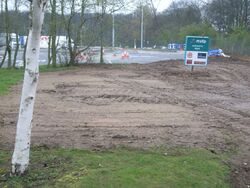 This service area was privately developed by Granada and Esso as an A-road service area. This made it an easy way to increase their presence without needing to tackle all the regulations that come with building a new motorway site. It was positioned two miles north of a small service area owned by their arch-rival, Forte. Blyth was planned quickly, and opened in early 1988.

The 16 acres of land had previously been identified for use as a shopping centre.

As a result of its small scale, Blyth used their standard back-up design with a cross shape. This turned out to become much busier than expected, so when Burger King was added it was placed in the very middle of the building, rather than interrupting the small restaurant area.

The restaurant and coffee area followed Granada and then Moto's brand names changes, becoming EDC and Caffè Ritazza. An "EDC Express" van would be parked outside to manage queues. The restaurants then became Costa, Greggs and a shared seating area.

As a result of the original partnership, the forecourt was operated directly by Esso, who fitted it with a Snack & Shop store and Coffee Nation offering. It was sold to Euro Garages in 2015. Euro Garages rebranded the store to SPAR, added a Starbucks on the Go machine and a Subway offering. The Subway unit closed in late 2020 but, despite the closure, the unit remained fully furnished for some time after.

When it was built, Blyth was accessed from the main southbound carriageway of the A1. The Hilltop Roundabout allowed northbound traffic to turn around, access the service area, and then all traffic followed the exit back to the A614.

The roundabout was replaced with a flyover in 2008. As a result of the new alignment, the direct access from the A1 was removed and the existing exit road was made two-way. The old entry to the HGV parking area was turned into a turning circle. It was some time before all the signage was updated to reflect the new road layout.

Moving the entrance and the resultant tree planting left Blyth with a lot of green space. The old roadway was then turned into an overflow car park in around 2013.

Some people remember the Hilltop Roundabout for the Hilltop Café, which was positioned opposite where Blyth services was built. It had a long, glass dining room and a small, American-style tower in the middle. It was ran by Blue Star and had direct access from the A1 northbound. The café closed in late 1985.

In June 2019, EG Group opened a KFC Drive Thru and Starbucks Drive Thru on the other side of the Hilltop Roundabout. These facilities are not signposted from any main road but still act as competitors to the signed Moto facilities.