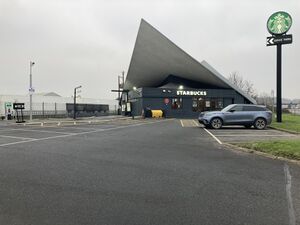 Markham Moor is an old roundabout which became a magnet for various facilities, a few of which have survived and continue to operate today.

There are two service areas at Markham Moor. Traffic can cross the bridge to use either side.

Additionally, a Starbucks Drive Thru is available close to the southbound carriageway, but not part of the service area. HGVs can access the forecourt, but no parking spaces are provided.

Short stay customer parking is available at all facilities for cars only.

No official parking spaces are provided for HGVs or other long vehicles at either service area but the Markham Moor truckstop (which is not documented here) does provide parking for HGVs (and coaches by appointment).

The original Markham Moor Roundabout, built in 1957 and extended in 1967, had facilities on each corner. The roundabout has now been replaced by a normal interchange junction but services still stand at a number of parts of the junction, confusingly signposted in all different directions:

Inside the improved Little Chef.

The south-west corner (serving northbound traffic leaving the junction) started with a garage besides the new, northbound A1 (old A57). This is understood to have been the site of Morley's Café, which closed in 1986. In October 1988, this was replaced by the Markham Moor North branch of Little ChefHistory, a Travelodge and a new Shell forecourt. The old garage was where the car park is now.

This large Little Chef trialled the original Little Chef Express in 1994. This became a Burger King, and then Coffee Tempo!. In 2011 it received the Wonderfully British refurbishment, gaining a 'Good to Go' deli counter. Subway opened alongside the Little Chef in September 2014 replacing Good to Go.

It was able to withstand many portfolio reviews. It eventually closed in January 2018 and was replaced by Euro Garages' own-branded EG Diner following the loss of rights to the Little Chef name. This closed in October 2018 and a KFC drive thru took its place in January 2019.

In 1992 the independent Markham Moor truckstop was built next to the main service area.

In the north-east quadrant (serving southbound traffic leaving the junction) a McDonald's and another Shell forecourt trade. The McDonald's opened in 1991, and was one of their first developments in the UK outside of an urban area. It's believed to be their first site at any UK service area, and was an important development as they were keen to open more.

Shell named this petrol station Retford, as opposed to their 'Markham Moor' branch on the other side.

2 InstaVolt electric vehicle charging points were installed in the McDonald's car park in late 2021 and went live on 27 January 2022.

North-west and the Roof 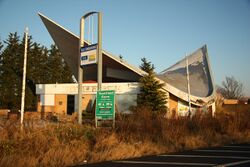 The north-west corner (serving southbound traffic approaching the junction) has had two Little Chefs. There is also the Markham Moor Inn and Garage on the A638, which is the historic route of the A1.

A new petrol station was built on the new southbound A1 (what had been the A57) in 1961. Architect Sam Scorer provided it with a distinctively-shaped roof to make it striking and easily identifiable. Known as a hyperbolic paraboloid, he used similar designs for a petrol station and church in Lincoln.

At Markham Moor, Happy Eater purchased the unusual structure in the 1980s and built their own restaurant underneath the canopy, using it as a distinctive landmark to help promote the branch. Despite first impressions, the restaurant building was totally separate from the canopy above it. They built a bog-standard box-shape, but the canopy meant above meant one of the corners did have to have a dip in it. This isn't very noticeable outside, but looks strange from the inside.

Kelly's Kitchen and Petrofina built a restaurant and petrol station next door to the unique building in 1987. Little Chef purchased their brand a few years later and turned this one into their Retford branchHistory.

Forte changed their Happy Eaters to Little Chefs in 1996, so this Happy Eater became Little Chef's Markham Moor South branchHistory. As this was the more distinctive of the two Little Chefs, the Retford one closed closed and became a Chinese restaurant.

The "hyperbolic Little Chef" was planned to be demolished as part of the junction changes in 2008. A public campaign saved the structure, and the junction was redesigned to work around the building by using a much sharper slip road. The petrol station did close during this time.

The Little Chef eventually closed in February 2012, leaving its distinctive building empty. The canopy became a listed building in March 2012, in a listing which made clear it was excluding the more mundane restaurant building built beneath it. Little Chef had intended to reopen it in 2016, but this didn't happen. Their reports show it was still in good condition inside, with some Little Chef signage and colours still evident.

The roof was accessed illegally for skateboarding by a group known as 'Urban Cowboys' in 2016. The group's YouTube video received a lot of media attention.

In April 2019, a planning application was made to convert the building into a drive thru Starbucks. Work started on refurbishing the building in June 2019, with it being painted in a dark colour scheme. A few days later, Starbucks publicly denied that a new branch would be opening here, adding that they had "no news to share".

Despite this, the building was re-fitted in Starbucks style, as well as gaining two new 50kW CCS and CHAdeMO InstaVolt electric vehicle charging points. It opened as a Starbucks in December 2019. A red plaque from the National Transport Trust explains the building's significance.